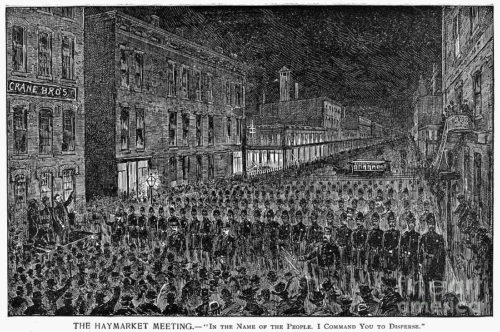 On this day in 1886 a Civil War veteran from Texas, Albert Richard Parsons, was falsely accused along with several others of a conspiracy to murder in Chicago, Illinois. By 1893 they were pardoned, yet it was too late to save them from being put to death by police. Why did the American justice system kill them?

Albert was only 13 years old when he volunteered serve in the Civil War for a Texas unit led by his brothers. First he served as infantry for his Confederate captain brother, next a cannoneer and finally cavalry for Confederate colonel William Henry Parsons.

After the “slave-holder rebellion” he joined had been defeated, Albert studied in college and joined “Radical Republicans” working in Central Texas on suffrage for the Freedmen (emancipated slaves); Albert helped register blacks to vote despite threats of violence and exploitation by white supremacists

Here you can see in a newspaper clipping how the KKK threatened to murder white Americans like Albert who enfranchised black votes:

Albert then married (Lucy Parsons) and unable to stay in Texas due to violent threats, they traveled through the Midwest. They settled in Chicago in 1873. In his “auto-biography” published by Lucy he wrote…

I incurred thereby the hate and contumely of many of my former army comrades, neighbors, and the Ku Klux Klan. My political career was full of excitement and danger. I took the stump to vindicate my convictions.

In April 1886 Chicago saw dozens of protests where people were calling for an eight-hour workday. Similar to his prior suffrage work to help the Freedmen, Albert stood up and spoke and wrote about industrial labor conditions as a major cause of unfair voter disenfranchisement.

On the 1st of May tens of thousands walked off their job for better working conditions. After more protests on May 3rd the police responded to a large group by shooting wildly at protesters they had called violent, killing at least one and injuring many others.

The following day on May 4th Albert spoke at a meeting in Haymarket Square and left.

Although Mayor Harrison had instructed the police to stay away by the end of that day hundreds of armed officers marched in and demanded protesters disperse. When a bomb exploded police again opened fire wildly into crowds. Many were killed (reportedly seven police and several protesters all were shot dead by police) as well as injured (sixty police, unrecorded numbers of protesters).

Prominent speakers and writers such as Albert then were charged with murder because protests could be violent, despite Albert not being there during the violence.

After an unfair trial most of the accused were sentenced to death. One died violently in prison, judged a suicide. Then Albert and three others were hanged in 1887.

Albert stood on the gallows and asked openly “Will I be allowed to speak, O men of America? Let me speak…” as the Sheriff opened trap doors to kill him before he could say more.

Two other men had asked and received commuted sentences.

Six years later, in 1893, the Illinois’ Governor Altgeld known for his “patriotic love of liberty” pardoned those convicted in the Haymarket Affair and called the unfair trial methods used a “menace to the Republic“.

The City of Chicago Haymarket Memorial describes these events as “A Tragedy of International Significance“:

…those who organized and spoke at the meeting—and others who held unpopular political viewpoints—were arrested, unfairly tried and, in some cases, sentenced to death even though none could be tied to the bombing itself.

Police targeted and killed those who advocated for better quality of life and voting rights in poor and immigrant homes. Although Albert had survived having unpopular views in Texas, had opposed the KKK after the Civil War, in Chicago he found himself falsely accused of violence and sentenced to death by the police… for speaking out freely in America on behalf of others, becoming too successful and popular with his anti-racist views.