PsyWar hosts a photo gallery with some interesting history, such as this one from WWII: 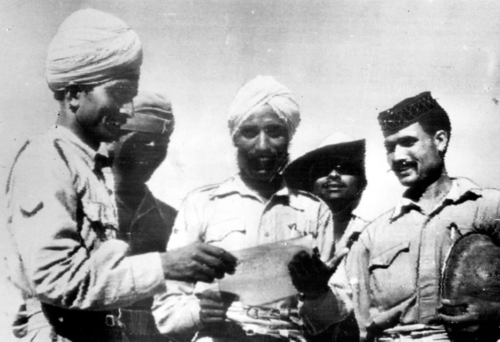 Indian troops in the Egyptian desert get a laugh from one of the leaflets which Field Marshal Erwin Rommel has taken to dropping behind the British lines now that his ground attacks have failed. The leaflet, which of course are strongly anti-British in tone, are printed in Hindustani, but are too crude to be effective. (Photo was flashed to New York from Cairo by radio. Credit: ACME Radio Photo)

The Australian War Memorial gives a sample of the crude work. Here’s a leaflet dropped by Nazis on 22nd August 1942 at El Alamein meant to unsettle Australia’s 9th Division. 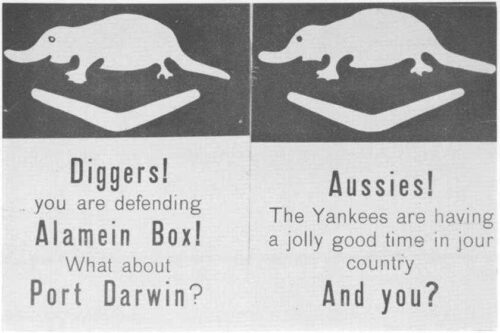 The platapus boomerang is a dubious choice for leaflets meant to hurt morale as it simply reinforced the official blazon of the 9th as you can see here plainly:

Update September 2021: Armchair Historian gives us his perspective on India in WWII

See also, headlines from Operation Bertram and Operation Torch reporting how easily and badly Rommel was routed by the British: 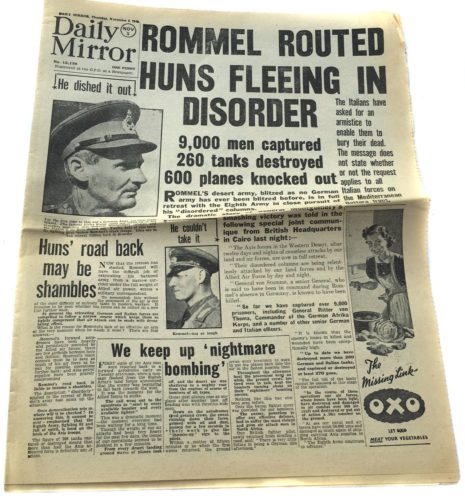 Rommel was impatient, hot-headed and disagreeable. His work often was beset by predictability, simple planning failures (e.g. communications and supply) and lack of accountability.

His troops ultimately were crushed by Allied forces in Summer of 1942 and, perhaps most notably, he abandoned them by 1943. A good thing too, given his personal role in spread of horrors from an unthinking devotion to fascism:

…empowered to “take executive measures against the civilian population”, Nazi jargon for robbery, murder and enslavement.

“The Germans expected to seize Lyon quite easily,” Fargettas recounted. “But on the morning of June 19, they faced very strong resistance, in battles lasting for several hours. After the Wehrmacht won the first battles in the afternoon, they executed French as well as African prisoners. But on the next day – after the last pockets of resistance were defeated – they divided the prisoners into two: The French on one side, the Africans on the other. They led the latter down an isolated road. They were sent to a field and machine-gunned.” During these massacres, some French soldiers were also executed or wounded for trying to intervene.

Mass executions of POW and obvious violations of war conventions in the Chasselay Massacre was not the exception. Rommel was directly involved in an illegal execution of a French Colonel in 1940.

Hiding such obvious failures of leadership while cooking up a “famous reputation” for the Nazi General was propaganda by its military intelligence. In other words there was a concerted effort by Rommel and his peers to conceal their ongoing atrocities from the Allies. Such propaganda was spread around Europe in an attempt to hide reality and “morale boost” its troops facing an unavoidable defeat.

I mean by 1942 it was very clear that Germany had no chance to win — it became a question only of how long the Germans would continue to make terrible life choices.

An interesting footnote on how Rommel was routed so quickly by Montgomery is that the former tried to blame his failures on obedience to Hitler or at least interference, while the latter made no excuses when he refused to listen to Churchill.

A couple years after Rommel’s disasters in North Africa and Europe he followed stupid orders to kill himself, citing to his family a fear of living in a world without Nazism (and also Hitler threatened to shoot dead Rommel’s entire family unless he committed suicide immediately).

Such fealty was spun as propaganda into bogus claims that the retreating General who swallowed poison was in fact loved by Nazis.

Even more laughable was their propaganda that he died from battle wounds, a sad twist since he had walked away from battle and then Hitler killed him with a pill.

Curiously, American soldiers to this day sometimes buy into widespread propaganda and lies about the Nazi Rommel, very similar to American pathetic attempts to believe in the failure and fraud Confederate General Lee.

Even more to the point, and another interesting footnote in history, Winston Churchill in 1941 had told the Allies to name tanks with real words instead of “gibberish” designations. The M3 “General Lee” was named for one of the worst military leaders in history, assigned to the American variant, while the British chose M3 “General Grant” for their own model. The Grant was shipped from America to face Rommel and became a prominent factor in General Montgomery’s crushing defeat in the first battle of El Alamein.

British Prime Minister Churchill then pressured the U.S. to call their next tank the M4… Sherman.

Fast forward to today and here’s the view from a U.S. M2 Bradley during the Iraq War, where a Nazi portrait has been attached inside the “fighting vehicle” in a completely tone-deaf fashion.

Surprised there isn’t a picture of General Lee next to it.

Anyone stepping into that vehicle should sadly “get a laugh” at the bad propaganda, just like 1942 Indian or Australian troops in the Egyptian desert.