The first battle of El Alamein in July 1942 was a clear victory by British forces against over-stretched, exhausted and poorly organized impatient Nazi invaders. Battalions of M3 “Grant” Lend-Lease tanks ripped apart Rommel’s best armored divisions as he predictably advanced from the south below Alam Halfa Ridge. The second battle would be an even bigger victory thanks in part to disinformation tactics.

At the start of the summer the Nazis had been confident they would be rolling into Egypt. General Rommel was so unrealistic about the situation that by the end of June Mussolini himself flew into Libya (under Italian rule) expecting to join a victory parade through Cairo.

Yet General Rommel’s hot-headed and poorly constructed strategy of attacks stalled in a disarray and his propaganda became seen as a laugh. Mussolini in July high-tailed it home as Nazi leaders began to waffle and flail. From this point on the Axis rapidly would be pushed back until entirely out of North Africa.

The man appointed to do it was Britain’s General Montgomery who was set on August 13 to command the Eighth Army. His entrance was something of a shake-up, a move reminiscent of 1917 in WWI when General Lord Edmund Allenby landed as Commander of the Egyptian Expeditionary Force.

Deception was a game Allenby had famously adopted in WWI to turn tides and roll through and around the Ottomans (and Germans). He also had written about it after the war, as captured by many books.

Such tactics were back on the table for British planning, as Montgomery decided disinformation would be essential to victory in a second battle of El Alamein. In fact, he would repeat much of the tactical strategy used in WWI — deceive and offset, weaken with artillery, surprise and smash through.

The connection to Allenby’s WWI campaigns was no coincidence for the British in El Alamein. The head of British deception in WWII arguably was Field Marshall Lord Achibald Wavell (British Commander in Chief in the Middle East 1939-1941). He served as a senior officer under Allenby in WWI and thus was well aware of what had worked before and where.

An early WWII test, for example, was the decisive 1940 victory for the British at Sidi Barrani. Successful plans (Operation Compass) were credited to Wavell’s deception expertise. His intelligence operations definitely made a big impression.

Wavell had enabled just 2 divisions (less than 50,000 ready under General O’Connor) to confidently head into battle against over 300,000 Italian soldiers in Egypt. Using an old Allenby WWI tactic, he faked British troop movements and generated bogus radio traffic to suggest they had started relocating out of Egypt and into Greece.

Total surprise was the result. After three months in 1940 just 500 British were killed yet 10 Italian divisions had been destroyed and over 100,000 men taken prisoner.

Fast forward two years, the 6th of October 1942 was the day Montgomery ordered disinformation to be fed to the Germans.

Specific tactical procedures for Operation Bertram were conceived by the brilliant yet controversial Dudley Wrangel Clarke. Deception would be to protect a surprise night offensive near the Mediterranean coast by the British on October 23rd.

Some readers may recall September 25, 1942 was the day an Allied plane had crashed near Spain, which created a certain sense of urgency to deception methods.

There were no survivors; one fatality in particular that worried Allied commanders was a courier who carried sensitive documents about [November 1942] invasion plans for North Africa, called Operation Torch. Allegedly those documents didn’t leak yet it was this incident that inspired Allied intelligence to attempt an intentional leak.

Some readers also may recall that February 1942 was when the British were ignominiously defeated in Singapore due to significant intelligence failures, not least of all reallocation of its own tanks coupled with allegations that the sound of enemy bicycles had been mistaken for approaching tanks.

And on top of all that, “visual deception” had been formalized to confuse and disorient Nazi attacks.

In 1941 the filmmaker Geoffrey Barkas was made Director of Camouflage at General Headquarters (GHQ) Cairo. Among the specially trained Royal Engineers, camouflage officers under his command were artists, zoologists, and theatre and film set designers. Creative improvisation remained key to their success.

Thus in 1942 the British were thinking a lot about shifting from defense to offense and using deception methods to improve chances of success; how to give Rommel the impression of a large slow offensive to come from the south sometime in November, while actually it would come very quickly in the north weeks earlier.

Four elements of disinformation were set in motion for Bertram.

First, the mass of actual British preparations had to be hidden, such as extensive materials in movement around the north.

Second, all the preparations had to appear much slower than reality by a factor of several weeks.

Third, a fiction of British preparations for an attack from the south had to be convincing.

Fourth, during the actual attack along the northern shore there would be sea-borne tactics to distract and disorient the Germans.

The most complicated of these was procedures to conceal actual equipment and men in the north. Mechanized tracks for thousands of tons had to be erased, stacks of supplies had to be minimized. Painted canvas (another Allenby tactic, although dummy horses in WWI) created “dummy trucks”.

Guns and tanks were covered over before sunrise to become invisible by aircraft. Many real trucks also were staged ahead of time so they could be swapped with the canvas ones concealing arrival of more tanks, for example. 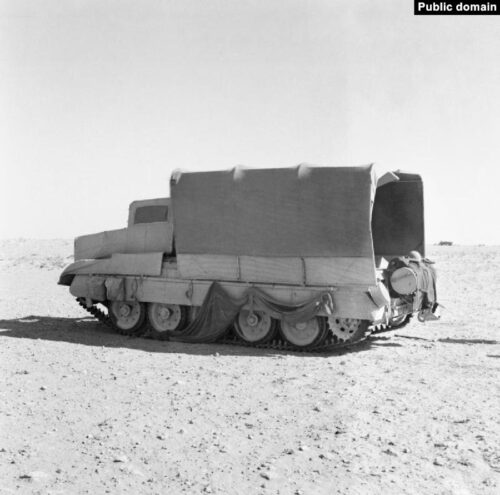 Water was of course essential to any bluff in the desert, as Allenby’s WWI disinformation tactics also had demonstrated so well. A fictional assault launch point in the south was set as a target for a fake water pipeline to work towards. It was very openly built using a timeline meant to attract German observation. It was hoped the Nazis would think pipeline status was how they should estimate a attack from the south sometime in November.

The clever efficiency of the fake pipeline was how it reused a small section of props (disused cans) over and over again. A trench was excavated during the day next to materials only to be filled in again at night. This gave the appearance of forward movement to airborne observers. The operation slowly shifted like this indicating progress without any pipe being laid at all.

Another overt procedure by the British was moving tanks during daylight to attract attention. At night these tanks moved forward elsewhere to be concealed, and their last positions filled by dummy tanks coupled with noisy wireless signals to convince Germans of slower progress.

All the emphasis on a southern front and late attack then led to yet another deception tactic when British forces began their actual attack in the north along the coastline. Fast boats fitted with loudspeakers played recordings of battle sounds to give the impression of flanking by an amphibious landing. This also helped serve as disinformation related to November plans in Operation Torch amphibious landings.

Montgomery’s operation worked as intended. The Nazis were unprepared and disorganized, shortly in retreat.

The third phase of the battle, ‘Break-out’, was fought between 1 and 4 November 1942, when Montgomery, judging Rommel’s forces at breaking point, ordered the final blows against them. By 3 November it was obvious that Rommel was preparing to withdraw, and the next morning the 5th Indian Brigade attacked, driving a wedge through Rommel’s front, thus enabling the 1st and 7th Armoured Divisions and the 2nd New Zealand Division to go in pursuit of enemy forces, now in full retreat. In Britain, the church bells were rung for the first time since May 1940 to celebrate the Eighth Army’s success which was, as Winston Churchill described it, ‘a glorious and decisive victory’.

British deception had worked so well it completely convinced Nazi observers they faced no threat at all in the north, right before they were attacked from the north. Montgomery faced difficulty, of course, yet his surprise tactics rolled quickly towards victory with troops in high morale laughing at Rommel. 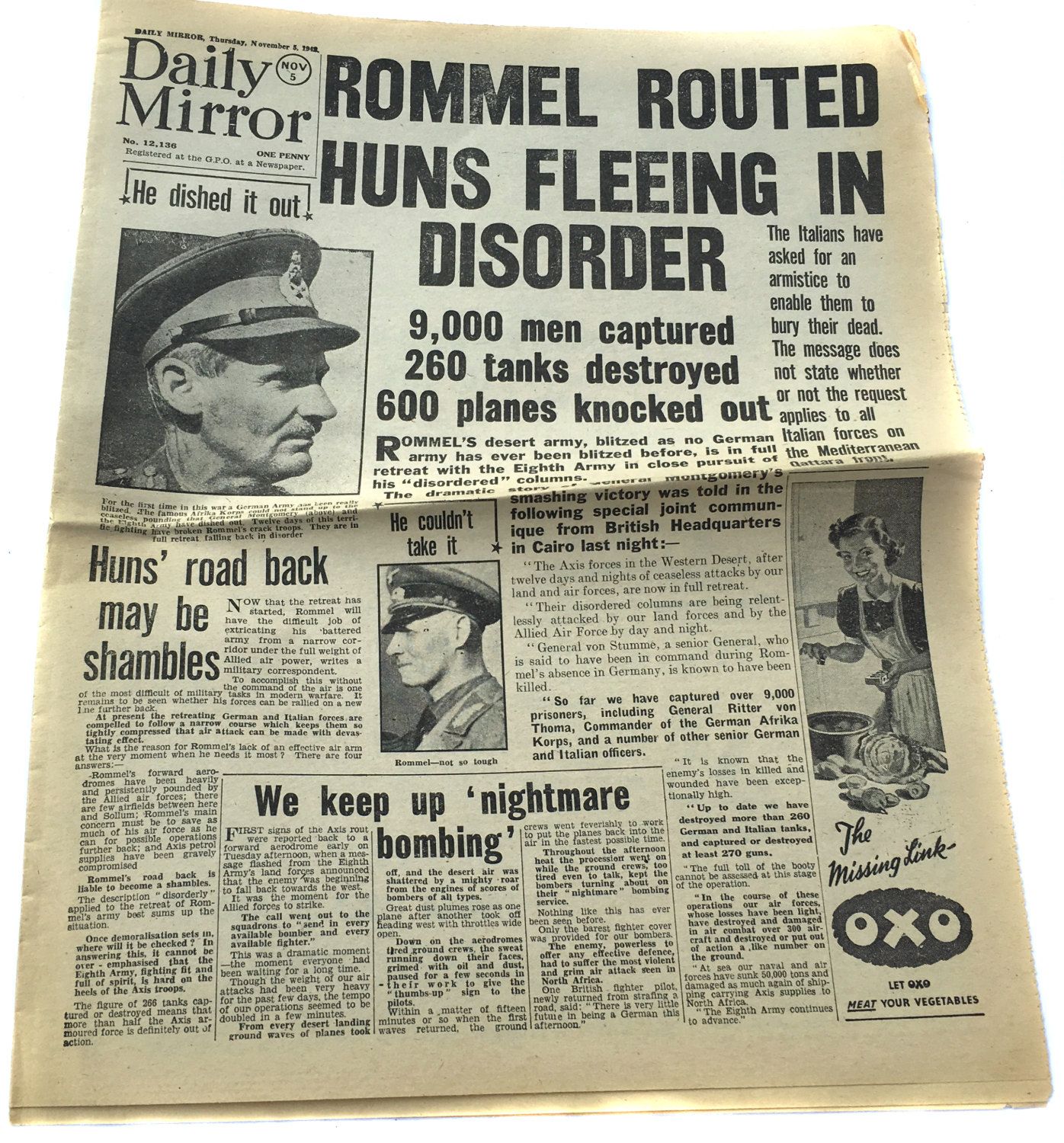 Despite replaying a (modified) WWI strategy that had been widely discussed by the British themselves over the 20 prior years, Montgomery managed to achieve high shock value. Rommel by comparison was entirely predictable and defeated as such (although more research is needed to determine whether Axis communications, especially Italian, were decrypted at Bletchley Park and their North Africa campaigns had been totally compromised).

Perhaps then, even more to the point of security, the true triumph in deception under Operation Bertram may have been achieving such a level of secrecy that Allied plans were neither compromised nor even guessed.