Confederate memorials in prominent areas are a form of domestic terror tactics, like racist graffiti denigrating the American landscape.

They are akin to someone putting up a statue of Timothy McVeigh and Terry Nichols, or naming the streets after them, right in front of the Alfred P. Murrah Federal Building in Oklahoma City.

Who would do such a thing?

McVeigh and Nichols would. Does that mean they should be allowed to do it, or that people should avoid removing some monument to terrorism put up by the terrorists or their descendants? No. We would take them down.

What would their statues be for?

We have to ask the simple question whether the statues represent the worst of people. In other words are they known for horrible things primarily and is that the purpose of the statue?

Have you ever heard of McVeigh except as a result of his terrorism?

More to the point did General Bragg ever do anything worth celebrating in his career or was he only the guy hated by everyone, known to even shoot his own soldiers in the back during his failed attempts to expand his love of slavery?

And why should everyone care about these issues? Banksy explains:

At first I thought I should just shut up and listen to black people about this issue. But why would I do that? It’s not their problem. It’s mine. People of colour are being failed by the system. The white system. Like a broken pipe flooding the apartment of the people living downstairs. This faulty system is making their life a misery, but it’s not their job to fix it. They can’t – no-one will let them in the apartment upstairs. This is a white problem. And if white people don’t fix it, someone will have to come upstairs and kick the door in.

Confederate celebration and monuments are a rare case of the losers trying to re-write history. They were put up to terrorize Americans in their daily routines.

Leaving them up gives the false impression that white supremacists did not lose their war of aggression against America and allows white power groups to falsely claim their cause of terrorism is validated.

Here’s what you need to know about tearing down prominent Confederate names, statues, memorials and the like:

The push to raise Confederate monuments was an orchestrated effort to erase history and then rewrite it with a loser’s narrative. It perpetuates Civil War and terrorizes Americans in plain sight.

General Lee pleaded with his followers to never raise a memorial to him or his cause of slavery, yet white supremacist groups have ignored his exact orders and disrespectfully done the opposite.

On the 4th of September 1869 Lee declared there should be no monuments to him because Americans should commit to oblivion the feelings of his slaveholder rebellion.

Taking down public Confederate celebrations and signals is a restoration project.

Here’s an idea that caters for both those who miss the Colston statue and those who don’t. We drag him out the water, put him back on the plinth, tie cable round his neck and commission some life size bronze statues of protestors in the act of pulling him down. Everyone happy. A famous day commemorated. 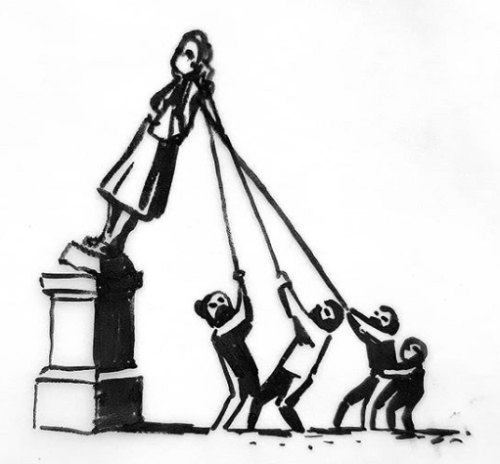 Stop the erasure of American history from Confederate graffiti trying to cover up real narratives with racist and false ones. No more context-free commemorations allowed of the failed slaveholder rebellion.

And anyone who openly disagrees with taking down Confederate signals should be drafted into a minimum of two weeks service cleaning and restoring Grant’s tomb.

Remember at the start when I asked “Who would do such a thing?”

I’m talking now specifically about the shocking 75% of white women in America who say they want to keep the ugly Confederate statues.

These white women prove the point made by James Baldwin:

New laws, gestures of sympathy, and acts of racial charity would never suffice to change the course of the country. Something more radical had to be done; a different history had to be told.

Baldwin was saying the real history of America has to be told, which means restoring it from those who have been trying to disgrace and erase it with their Confederate statues.

FiveThirtyEight project has picked up the story and has this excellent conclusion:

…deeper understanding of their historical context paints a very different picture — these statues were meant to promote white supremacy and intimidate Black people… the narrative has changed to telling history. Who have we left out of history? What history aren’t we telling through the veneration of Confederate leaders?