In 2016 the National Socialist Movement (NSM) of America, also known as Nazis, claimed to be “buoyed by a Donald Trump victory”, and announced a shift in symbols they considered headline-worthy:

The Odal rune, a less-well-known Nazi Germany symbol, will take the place of the swastika on all official uniforms and banners. Mr Schoep says it’s a gentler approach to preaching the same messages. “The party leadership has every intention to bring the party, our leaders, our members and supporters into the halls of government here in the United States, and to do that we must reach more of the public.”

What would the Nazi version of an odal rune look like in their campaigns to enter the halls of US government?

The CPAC 2021 event gives an obvious answer by creating a main stage in the shape of one:

Way back in 2014 this kind of thing used to be a huge problem. A London retailer was forced to apologize and recall a jacket that “inadvertently” displayed the Nazi odal.

Its £205 “grunge look” Horace hooded denim jacket featured an emblem worn by Second World War SS troops. The ancient Norse odal rune, which is similar to a swastika, was used to symbolise Adolf Hitler’s belief in a pure Aryan race.

Just to be clear an ancient Norse odal has straight arms, lacking the very distinctive up-turned “surrender” arms of the SS odal.

The Nazis shamelessly appropriated others’ symbols as their own and forever tainted them, so sometimes it can be hard to establish the shift from ancient symbol to Nazi beliefs. I’m not sure how much that matters though as the ADL documents how a Norse odal is often displayed by white supremacist groups in general, so it’s pretty clearly a symbol of hate.

In 2017 white supremacists marched with the straight-armed Norse odal. If you look carefully at a photo of hate groups “uniting” to attack America, there is a giant NSM banner with Norse odal. 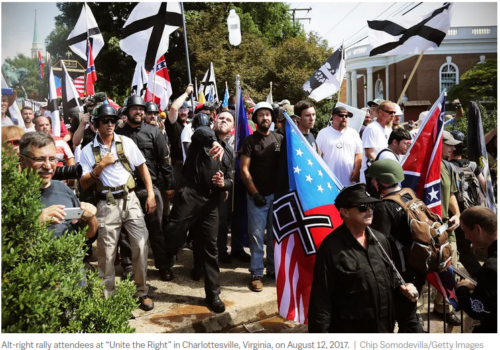 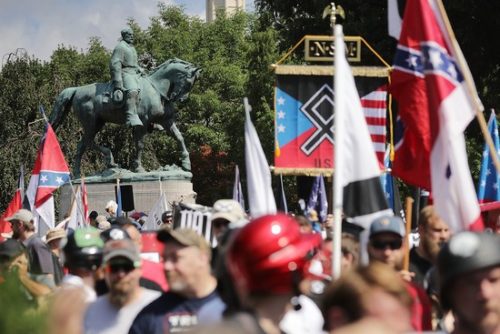 See the NSM at the top of the banner with a Norse odal?

Trump described this deadly hate group march that killed Americans as “very fine people”. Even after objections he tried to clarify his support of hate groups with “you had many people in that group other than neo-Nazis and white nationalists.”

The man occupying the White House delivered the argument that Nazism was mainstream to the Republicans, exactly what NSM and white supremacist activists had promoted in their campaigns to wave a dog whistle flag and be seen as “many people” — wearing a red hat, waving an odal rune, instead of obvious Nazis with a swastika armband.

If we want to abolish [democracy], we’ll first need to master it. […] We always gain power legally. This is more terrifying to our rivals than any number of street fighters or gunmen. They would rather lay down their own lives fighting us in the streets, than live to old age under our rule. If we really want to punish them, we must be Republicans, not revolutionaries.

Want a historian protip? Nazis hate more than anything else in the world being embarrassed and shamed. It is their kryptonite. They are so insecure in their sense of self worth, if they are made to feel embarrassed and shamed they lose bodily function and fall apart. The same article has this tell:

This is not to say we should descend into optics cucking. Far from it. Anyone who dares punch right should be descended upon with all of the venom we can muster. However, we should master the art of the dog whistle…

In other words, shame is toxic to the Nazis and so they still defend the interchangeability of a swastika and confederate battle flag, while also running “dog whistle” symbols to attract followers who normally would worry about the optics and obvious shame of being seen as Nazis.

This is a repeat of history, as the same tactics were known to be used by Nazis in the late 1930s. See also my post on “what isn’t a swastika“.

It also is a repeat of more recent history, with “Christian Villain” training leaflets made by hate groups in America intended to help Nazis rebrand their image to “mainstream” anti-federal Western ranchers (pardoned by Trump) or an infamous anti-federal posse of sheriffs.

CPAC 2021 changes all this, because they went with an explicit symbol of Nazism. They intentionally chose the villain costume.

It shows how Nazis have been fully embraced by Republicans now, having built a stage design for the very distinct Nazi “surrender arms” odal, which cannot be confused with any other use, time or affiliation other than Hitler.

CPAC went out of their way to use the exact symbol banned in Germany, used only by Nazis; one that tracks back logically to 2016 NSM announcements that Donald Trump was their man to carry Nazism into American government using the odal.

Another consideration is that the SS wearing the odal infamously rejected allegiance to constitution or government, instead pledging to follow only Hitler. Before 1934, the German pledge had this opening phrase:

I swear loyalty to the Reich’s constitution…

After 1934 in a Nazi dictatorship, the pledge was changed to this:

When I say “their man” I mean it would be further proof of this CPAC odal significance if we see Nazis at the same event trying to emphasize worship of a single man, instead of allegiance to a constitution.

Sure enough, CPAC was trotting out bizarre and gaudy statues of Trump for people to pledge themselves his obedient follower.

A golden statue wearing swim trunks and flip flops represents a mish-mash collision of the extreme right-wing evangelicals, the anti-government boogaloo and Nazis, if we really must parse this idol worship.

Of course, some always will say they can’t see any rune connection (as if planned and built stages just come out naturally this particular way), or say that a connection to NSM isn’t clear enough yet (as if the NSM repeatedly taking credit isn’t an admission of anything).

Such claims of blindness is precisely why the CPAC stage was in the shape of a Nazi odal instead of a swastika, as the NSM clearly explained for us at the start of this blog post.

Nazis love to play dumb and lie about their intentions and meaning, forcing their targets to waste time trying to stop the “permanent improvisation” of tyranny. A toddler-like complete lack of responsibility for actions is a defining characteristic of Nazism (not to mention Facebook management).

Perhaps it helps to put it like this: in October of 2020 viewers of a TV show complained that a man had the obvious Nazi symbol “88” clearly tattooed on his face. The TV program confidently countered that there was no connection; in fact they claimed a very important meaning that would shame anyone criticizing the 88.

At first the channel defended Lumsden, a joiner from Bristol, stating that similarity between his tattoos and Nazi symbols was “entirely incidental” and that background checks had confirmed he had no links or affiliations to racist groups or views. It was said the number 88 referred to 1988, the year of Lumsden’s father’s death.

Death of his father must have been so traumatic, that year so deeply meaningful, he incidentally put a large 88 permanently on his face. Makes sense, right? So everyone stopped thinking it was a Nazi symbol… until someone smart called the man’s father to confirm whether he died in 1988.

The Daily Mail subsequently tracked down Lumsden’s father Trevor, who lives close to his son and who declared to a reporter: “I’m here aren’t I? I’m alive and kicking, so I’m not dead yet.”

Such blatant disregard for truth is par for course with Nazis these days.

On Wednesday, the Trump campaign placed 88 ads on Facebook — 88 is a number with Nazi connotations — that featured a symbol used by Nazis to denote political prisoners in concentration camps. The Trump campaign denied the reference to any Nazi symbols was intentional…

If you want to read more about Nazi symbolism hiding in plain sight, I have another blog post that offers even more detailed background and modern examples.

Those are the basic facts for America today, and at this point it’s clear Trump is attempting to run on nothing more than the “white grievance” platform of Nixon and Reagan — white insecurity political influence of the KKK (heavily “Nazified” by David Duke, as Trump himself admired in 2000).

Update Feb 28: It’s been pointed out to me Russian “FSB operators love2rune“. They are linked to extremist white supremacist groups operating in foreign conflicts, adopting the Norse odal as a marker.

This also was documented in 2014 by Ukrainian press. Alignment with symbols of Russian military foreign operations helps explains why in 2016 American Nazis announced they would be adopting the odal: