Did you know Nazi minister of propaganda Goebbels, one of Hitlers closest men, said “The truth will always win”?

There’s been a problem on the Internet for a long time, as we all know, that data integrity gets ignored by security professionals. Cliff “Cuckoo Egg” Stoll in 1995 infamously warned us about this in “Why the Web Won’t Be Nirvana“, which everyone has basically ignored.

Sure people work on availability (howabout them nines!) and of course after 2003 the boom of documented huge privacy breaches have been lighting up news headlines and even board-level radar screens.

But — and it’s a very BIG but — integrity largely has been ignored.

People now repeatedly and freely post quotes and attributions that simply were never said, or fake pictures that were never taken (as I made light of several times here).

Yet show me a security team prepared and ready to do a correction on data and deal with sources disputing veracity. It was some kind of major problem to get Facebook to post warnings and moderate speech after how many years of obvious safety harms including atrocity crimes?

So what did Goebbels really say?

This is a natural environment for the historian. Which source to trust, what really happened and was said? That’s the heart of the mission for anyone claiming to understand and be able to explain history.

Now bring the typical security professional into such a fray and it’s like having a deer in headlights.

I’ve given talks about this disconnect in our industry for decades now. In several cases I’ve tried to illuminate how easy it is for security professionals to use low integrity themselves while talking about the importance of privacy.

The over-specialization in security actually has led to an even greater problem (e.g. integrity flaw risk increases dramatically as transparency decreases) few are willing to talk about either.

If you hear a CISO press 100% into encryption and not at all into issues of keeping data safe behind a lock and key, where they throw away the key, hold up one minute and think about what you’re doing.

Anyway, one good example is how Goebbels somehow has been attributed with saying “Truth is the enemy of the state” when in fact he said the opposite. No, seriously, Goebbels was a huge proponent of telling the truth.

Robert Khoury’s 1982 “The Sociology of the Offbeat” had a good way of describing it on page 337:

Goebbels’ moral position in the diary was straightforward: he told the truth, his enemies told lies. Actually the question for him was one of expediency and not morality. Truth, he thought, should be used as frequently as possible; otherwise the enemy or the facts themselves might expose falsehood, and the credibility of his own output would suffer. Germans, he also stated, had grown more sophisticated since 1914: they could “read between the lines” and hence could not be easily deceived.

Thus we can easily see Goebbels’ actual words in 1941 were that truth wins and the use of lies — such as what he observed the Allies to use — are stupid and will lose:

The astonishing thing is that Mr. Churchill, a genuine John Bull, holds to his lies, and in fact repeats them until he himself believes them.

Compare the truth of what Goebbels actually said to what people think he said, as documented in the German Propaganda Archive list of false Nazi Quotations where the most popular forgery of all time is this one:

If you tell a lie big enough and keep repeating it, people will eventually come to believe it. The lie can be maintained only for such time as the State can shield the people from the political, economic and or military consequences of the lie. It thus becomes vitally important for the State to use all of its powers to repress dissent, for the truth is the mortal enemy of the lie, and thus by extension, the truth is the greatest enemy of the State.

What Goebbels believed in, just to be clear, is “the ultimate victory of the truth”, explained by German professor of history Peter Longerich in a 2014 biography.

Goebbels said THAT, and good luck getting take downs or corrections filed on all the pages to correct the record. Will the truth really win?

And speaking of Internet activism, guess who has been spreading Goebbels’ saying that truth will always win? 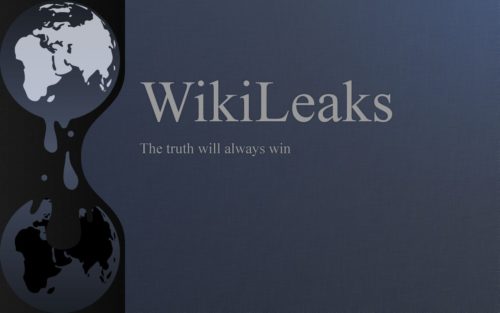 Yup. WikiLeaks has a Nazi propaganda minister reference as their byline. Ok, to be fair, a lot of people say this across the spectrum. Just imagine for a minute that Goebbels’ saying was correctly cited and known.

I mean imagine a future world (it may in fact be coming soon) where security professionals are working on how best to wade into this problem of integrity flaws. Too many have been acting for too long like the risk of Nazis deploying harms on every available platform is some kind of new thing or outside their expertise or domain…

Meanwhile actual attribution to the infamous statement should go to the poet Isabella Blagden in The Crown of a Life (1869):