An excellent write-up of the history of the American filibuster makes it absolutely clear how it’s rooted in blocking civil-rights, and its supporters are spreading lies about history to cover-up this fact:

The above three points are then beautifully wrapped up in this final paragraph:

In sum, the Founders did not create the filibuster. It emerged accidentally, was changed repeatedly, and was not “designed” for any purpose, and most certainly not to give the minority party a veto. It’s no more true than George Washington chopping down a cherry tree. It’s a story people made up to rationalize a system that nobody invented because nobody ever would create a system like this on purpose.

Only thing that seems missing is… whether there’s a clear correlation between Mitch McConnell of Kentucky abusing the filibuster so often/aggressively and an historic pattern of civil rights abuses. Look at this chart, for example: 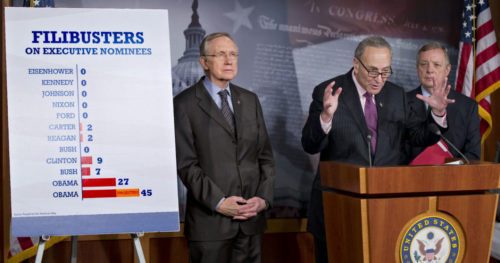 MLK even warned us about this.

Back in 1963, the Reverend Dr. Martin Luther King Jr. was asked about putting the fate of progressive legislation to the vote of the American people. Dr. King affirmed he would support such an approach, stating, “I think the vast majority of people in the United States would vote favorably for such a bill.” But Dr. King wasn’t done. He additionally admonished most astutely about the filibuster.

Fast forward to 2021 and America is at a filibuster crossroads. We have a choice to make. Do we uphold a racist Senate rule, i.e. the filibuster, or do we uphold American democracy by protecting voting rights?