Special Forces are orienting around the amazing performance characteristics of light bicycles with electric motors — motorcycles.

One of the curious problems with gasoline motorcycles is they grew too big and unwieldy at several hundred pounds, not to mention they ran on gasoline (not ideal for a military running on diesel). And since light-weight diesel motorcycles (as I wrote about here 15 years ago) never really seemed to take off, electric makes perfect sense.

A new story in iNews claims an exclusive by reporting Colorado is supplying commercial-sector mountain bicycles with electric motors to the military for testing.

In a reverse of the convention of defence technology finding its way to the civilian market, the vogue for military bicycles follows the global boom in e-bikes used by commuters and leisure cyclists. The value of the this market is predicted to reach £34bn by 2026.

But the new breed of special forces bike is a different beast.

With five-inch-wide tyres more likely to be found on a motorbike, a range of nearly 60 miles and silent 1,000w motors, the Jeep/QuietKat bike, made in Colorado, has been tailored for the needs of cycling special forces.

There are multiple problems with this story, although I have to commend it for making history front and center to the narrative.

First, it’s not a one-way convention. The civilian market also has a convention of making its way into defense technology. Special Forces often pull civilian companies like Patagonia, North Face, and Arcteryx into their equipment kits (as I’ve written about here before).

Second, the boom in e-bikes has been very pronounced in mountain bike racing, where training now is pedal-assist power to improve range in order to improve handling. In other words if you ride a technical pump track 50 times on an electric motor for training, then you likely get 40 times more experience in a session to prepare for non-electric racing than if you didn’t have the motor.

In other words, the “new breed of special forces bike” is NOT different from civilian bikes. A range of 60 miles on silent 1,000w motors is par for course, as well as extra fat tires commonly used for snow and sand trails.

Third, the history in this story has a GIANT gaping omission. This is not fair retelling.

Ever since the advent of the mass-produced bicycle in the late 1800s, armies have looked to harness the potential of soldiers on two wheels.

By the end of the 19th century most European militaries had formed bicycle units to replace horses for the delivery of messages and scouting and surveillance missions.

During the First World War, the British Army had two Cyclist Divisions, largely devoted to home guard duties. Prior to the war becoming bogged down in trenches, all sides sought to use fast-moving cyclist units, with the Belgian military using early folding bikes.

However, it was the Japanese who became most closely identified with the mass deployment of cycling soldiers. When Tokyo invaded China in 1937, it did so with a 50,000-strong “bicycle infantry”.

The ability to rapidly move large numbers of troops through jungle terrain without motorised transport proved vital to Japan’s early victories in the Second World War. During the invasion of Malaya in 1941, Japan was able to repeatedly outflank and overrun a retreating British Army by using bicycles along minor routes, ultimately resulting in the humiliating loss of Singapore.

During the Vietnam War the Viet Cong used bicycles to ferry supplies along the Ho Chi Minh Trail.

The Swiss Army maintained its Bicycle Regiment until 2001.

That covers a few bases, obviously (no pun intended). What is missing? Lots. In fact by the late 1800s Black Americans in the US Army invented mountain biking. The Buffalo Soldiers deserve credit, as I’ve written about here before, for riding bikes from the Rocky Mountains all the way to Missouri.

And the article claims the Japanese “became most closely identified with mass deployment of cycling soldiers” in 1937, based on a usual retelling about bicycles of WWI being primarily messengers and home guard.

Bicycles were lighter, quieter and logistically easier to manage than horses making them ideal for reconnaissance and communications work and had first been used in this way during the Second Boer War (1899-1902). The Haldane Reforms of 1908 reorganised the Volunteers, Yeomanry and the Militia Regiments into a Territorial Force following the Territorial and Reserve Forces Act 1907. As part of this nine initial Cyclist Battalions were formed… on the eve of the First World War, the Territorial Force had a strength of fourteen cyclist battalions.

Yet historians also make note of two-wheeled soldiers being in WWI fighting units, as I will write about more in a future post; for example, in the Canadian archives:

May 1916, the 1st, 2nd, and 3rd Canadian Divisional Cyclist Companies were amalgamated to form the Canadian Corps Cyclist Battalion. The newly formed Canadian Corps Cyclist Battalion began performing tunneling duties and operating rail lines, with their most famous tunnels being those near Neuville-Saint-Vaast. Integral to the assault on Vimy ridge in April 1917, the Battalion came together for the first time as a proper fighting force.

Also, as I suggested at the start, a bicycle with a motor is in fact a motorcycle so this history really should include motorcycles when considering usage and modifications to carry heavy loads.

Just look at how comfort for passengers has evolved over time, for example. 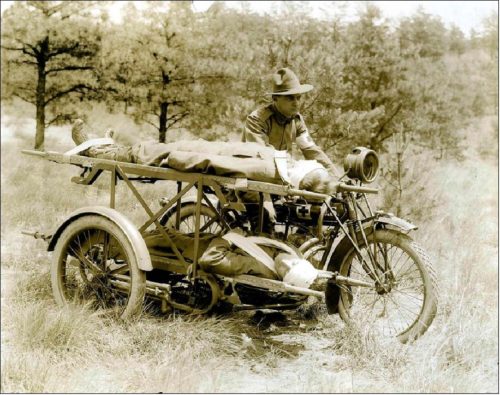 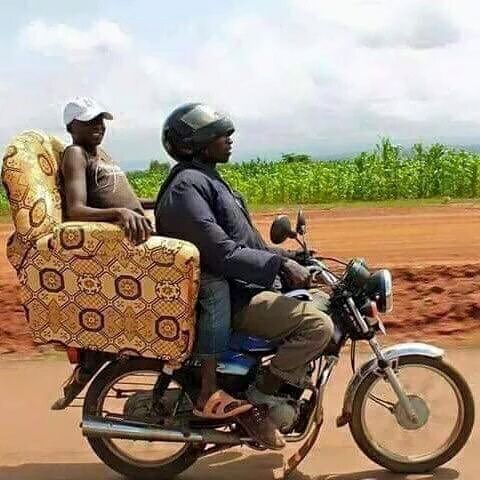