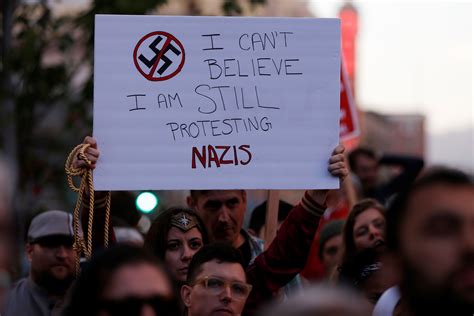 I’ve warned about this here since at least 2008. And if you look back at my tweets nearly a decade after that (2016) I’m not mincing any words.

That crazy-sounding excerpt of text I’m tweeting out, in case it’s not clear, is literally a page from Mussolini’s infamous 1932 “The Doctrine of Fascism” (technically ghost written by fascist politician Giovanni Gentile).

And I find it actually surprising to see any likes or retweets of my tweet. It always felt like I was talking into a void on Twitter.

Nobody should be surprised by fascism in America, since it has been a huge problem since long before fascism was a common word, yet somehow people keep acting surprised by it.

I recently wrote about the U.S. Vice President in 1944 speaking on how to find and “smoke out” American fascists. Before that I wrote here several times about Nazi Germany using America’s racist laws, gas chambers and concentration camps as its blueprint for systemic oppression and tyranny.

Today I’m seeing reports that confirm this long-time problem has again reared its head, despite all the warnings.

Please don’t think this is a new problem related to some event or one election. This is a very very old problem, perhaps as old as the country itself:

I also covered this in 2019 in a post called “Why the White House Pardoned Convicted War Criminals” where I even tried to illustrate the problem:

Here you can see why America’s 1932 Presidential election was so critical to the rejection of fascism; rejection of the “strong man” propaganda spreading at that time.

There are judges in America today (notably schooled by Harvard) writing opinions that sit 180 degrees from obvious lessons of WWII (let alone Civil War), brazenly opening the door to domestic terrorism and thus fuel another rise of fascism.

Finally, in the vein of “I told you so” reporting, I’ll just leave you with another recent post of mine about a new book worth reading: