The short answer: these pardons serve to undermine democratic institutions and demonstrate “strong man” capabilities of an unaccountable leader.

The longer answer: foreign military intelligence harnessing bias, a form of blind-spot no matter how intelligent the victim, can drive societal fracture and disfunction through manipulations of American sentiment. In this case a divisive issue of war crimes is being used as both proof of power and also a test of loyalty to an authority who is undermining checks and balances.

This kind of manipulation process should be familiar to some as canon of social engineering, with many books already written on the subject.

It also is well documented through the tragic history of the developing world, cruelly manipulated during the Cold War to foment coups and drive power towards dictators who would serve some narrowly-defined agenda (instead of allowing representative democracy). Chad, Guatemala, Angola, Mozambique, Iran…the list I’ve written about on this site alone is long.

The White House unilateral and un-American move to pardon war criminals shows how power is being manipulated by foreign military intelligence campaigns leveraging bias, much in the same way developing nations were manipulated during the past 70 years.

Rolling Stone explains succinctly how a modern system of malicious social media is being used:

Russia’s goals are to further widen existing divisions in the American public and decrease our faith and trust in institutions that help maintain a strong democracy. If we focus only on the past or future, we will not be prepared for the present. It’s not about election 2016 or 2020.

This is spot on. Militarized information campaigns push bias every day to build power slowly in order to wield at a moment’s notice, which Rolling Stone refers to as emotional drive:

She wasn’t selling her audience a candidate or a position — she was selling an emotion. Melanie was selling disgust. The Russians know that, in political warfare, disgust is a more powerful tool than anger. Anger drives people to the polls; disgust drives countries apart.

To make a finer point on this, some American military leaders are convinced that mutually assured destruction (MAD) kept the world free of war, while others realized there have been many wars despite MAD with untold suffering and the UN primarily has served to prevent escalations. This used to be a minor point of division worth debating.

By fueling bias, military agents have turned that division into a massive fissure where people are disgusted by the opposing side; either rule of law is respected (e.g. a UN Convention on the Rights of the Child is signed easily) or laws get ignored because might is said to make right (e.g. abuse of children gets called an inherent right of parenting).

Already we see people defending the White House by saying their dictator can do no wrong as they consider the current occupant “strong” and therefore above all laws. They’ll follow his orders to abuse anyone even the most vulnerable populations unable to defend selves.

To be fair the supporters of the current White House don’t necessarily like its occupant as much as the theory of “strong man” power that political scientists used to refer to as fascism. The support is driven by disgust with representative democracy, which means there is desire for dictatorship where a small cabal of power can even dispose of the current bumbling occupant and his family.

There even could be simmering intent to soon install a new and more competent/healthy dictator via secret police (typical role for those who commit war crimes) in order to better achieve some narrowly-defined self-serving agenda (e.g. national socialism, where a very small group gets defined as being an elite nation to absorb all benefits away from much larger state populations).

Here’s how Mussolini himself described it in a text he was credited with in 1932 (“La dottrina del fascismo”, an essay written by Giovanni Gentile):

Fascism attacks socialism first, then tries to destroy all of democracy. In a reverse theory, Mussolini here is giving away the gatekeeper/antidote. He apparently believed if people helped genuine socialist candidates and causes they were holding back the slide to dictatorship.

At that time the bias technique was against “bolshevism” and for “pacifism”. Hearst (and the Koch family) were far less successful than today’s Zuckerberg, however, and the pro-fascism leader in America failed to get elected President that year.

Here you can see why the 1932 Presidential election was so critical to the rejection of fascism; rejection of the “strong man” propaganda spreading at that time 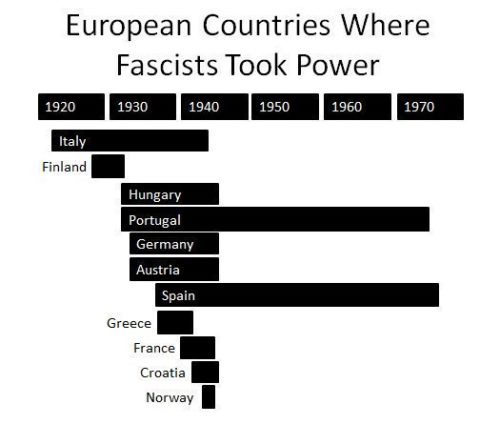 An Allied victory in 1945 clearly cuts fascism lines short. WWII soldiers from America destroyed the Axis forces, which had defeated socialism and trained their guns on all of democracy. This victory restored faith in laws and institutions (e.g. establishment of the UN) and meant the US was able to even export concepts of teamwork and respectful collaboration (lean out) onto occupied fascist countries. In that sense, Germany and Japan have become something of time-capsules for the values of the US that made it so successful.

Here’s how seasoned leaders have described the current White House attacking military values and authority, which appears to most as a mad man throwing away America’s democratic legacy to replace it with the disgusting ideas of fascism:

To put the US back on track and reverse the White House, these pardons for war crimes need to not disgust and divide the nation. And that seems unlikely given how fascist tactics are intended to disgust anyone who really believes in rule of law, let alone gave an oath to uphold the Constitution. A bully push towards divisiveness and away from law, as a disgusting test of loyalty, is exactly why the White House pardoned the accused.