Recently I wrote a quick note about Apple users believing that removing a monitor from an integrated computer/keyboard was somehow something novel or new.

I was reminded of the amazing and famous Commodore VIC-20 of the 1980s, and how easily people overlook the past.

That got me thinking about another “new” trend in virtual world software. Sure enough, I found current trends may be trying to repeat things from before.

What we take for granted in today’s MMOs — the constant presence of thousands of real humans interacting with us in a virtual space — simply blew the minds of those who first encountered it. And way back when, those encounters depended on the person and technology available. Some folks had access in the ’60s and ’70s to the early form of the internet and email in universities and government offices, but these close encounters of the virtual kind only started to make its way into households in the ’80s (and even then, mostly to those plugged into the geek community). The developers of these programs — the MUDs, the BBSes, CompuServe, etc. — were truly pioneers forging a path while trying to figure things out on the fly. So it amazed me to hear that I’ve been missing out on a key part of MMO history by overlooking Lucasfilm’s Habitat, which wasn’t quite an MMO by modern standards and yet created a graphical virtual world with many of the elements that were adopted into later projects. In our two-week look at Habitat, we’ll see just how eerily similar this 1986 title is to what we know today — even though it came out on the Commodore 64.

Lucasfilm’s Habitat on the Commodore 64.

It was just one of many virtual worlds from long ago that nobody talks about anymore. 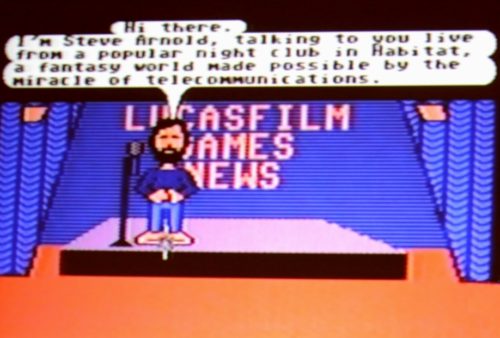 Think about this long dead software the next time someone asks what will change when virtual worlds arrive.

How long will it be before we look back at metaverse and laugh about how primitive it was?