An interesting turnabout from the timeline and details of the Uvalde child massacre is how a generic armed defense argument is being proven bogus yet again.

First, a plethora of armed police were on the scene and didn’t respond to an active shooter. We can easily assume from this that future incidents would continue the same unless something changes, and that something is the opposite of an increase in guns.

Regardless of how many armed members of a group showed up on scene to defend, the vast majority repeatedly and predictably failed to deliver the very thing they were tasked with because of a lack of gun regulation to help defenders.

When people say the general population should have access to guns without any regulation then it’s logical to expect an increase of mass murders, which the data clearly shows. 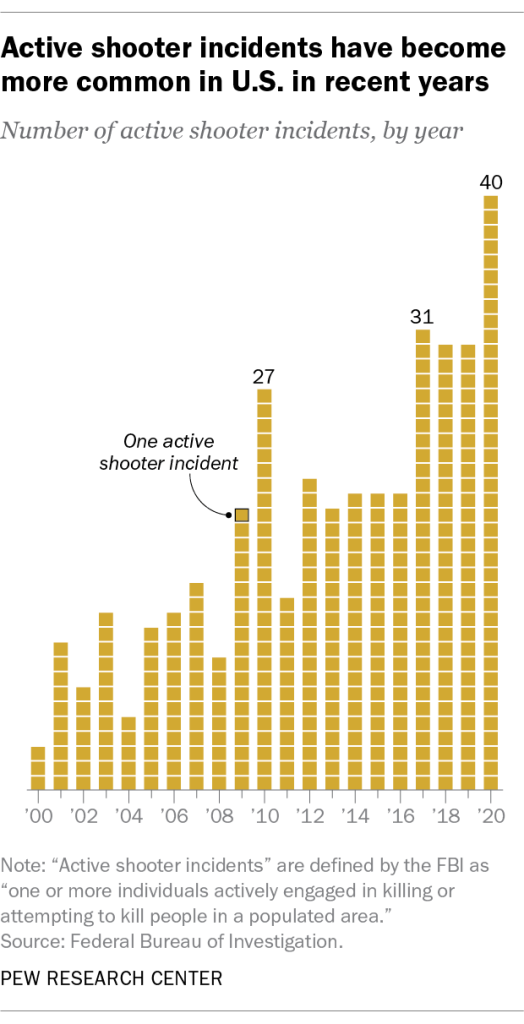 Tragedy is the very real and obvious outcome of blanket “arm the people” sentiment, which is why the following fact is so noteworthy.

…the U.S. appears to be the only place in the world where some want to arm teachers…

Israel for example sometimes comes up as a place where guns are carried by a general population. Some try to argue America should emulate this, however they overlook or ignore the fact that school teachers there are definitely NOT armed.

Amos Shavit, spokesman for Israel’s Ministry of Education, in 2018 put it bluntly:

Professionals deal with security. Not the teachers.

Shavit is talking about armed guards for schools who report into local police. A criminologist at Hebrew University in Jerusalem gives further context in that same article. Although Israel compels most citizens to serve in the military and go through basic weapons training, shootings are rare because:

…it is very, very hard to obtain a weapon in Israel.

If America were to be more like Israel, then it would heavily regulate guns.

This brings to mind questions like who defines professionals, and who sets criteria for success (who do they report to)? Remember 1921 when firefighters in Tulsa refused to respond as they watched an American city burn to the ground?

Saying there should be more firetrucks for everyone, or every teacher should drive a firetruck, sounds crazy because it is so opposite common sense. There’s not only diminishing returns from this kind of saturation, it can generate overconfidence and confusion that impede top professionals from dealing with security.

In fact, after the failure of a security guard in the 1999 Columbine child massacre a very specific armed defense doctrine was attempted to prompt all future dedicated armed responders at schools to immediately engage instead of hiding or holding position.

People may think increasing open “fire-power” availability could have some inherent technological benefit, yet it tends to have the very opposite effect. Escalating attacker capability means making everyone far less safe unless other essentials factors (e.g. morals or similar regulation in the use of guns) come into play using concepts like respecting laws meant to serve public safety.

To put this another way the very factors that would make guns far more effective in any armed defense model tend to manifest as a form of regulation of guns that reduces their numbers overall. A raw increase in a number of guns thus tends to correlate to a decline in safety and stability, since unregulated the guns always will trend towards permanent improvisation and chaos (violent assertion of power in disrespect for law and order) where armed defense is more and more unlikely and unsuccessful.

Think of it as increasing firefighters trained professionally to run into a burning building. That actually reduces the number of firetrucks per capita by introducing regulation of technology through a training regimen focused on survival.

It’s very different from everyone being expected to come with minimal training, no background verification, keep firetrucks in their driveway and hope some percentage of everyone stuck in a traffic jam to get to a fire would still volunteer to run in. Regulation has to be fit for purpose in that it measures appropriate outcomes (e.g. survival).

Second, failure to respond was only worsened when police used their guns to prevent all others from responding. Police actively detained and disabled rescue groups of parents, and even federal officers — the blue line was doing the exact opposite of protecting or serving public interest (arguably consistent with armed groups in Texas ending on the wrong side of history).

It thus made even less sense for armed defense doctrine at this point since it interfered unjustifiably with those who were actually trying to save lives.

More children arguably would have lived if fewer guns had been used in the armed response, since those defensive guns were turned against people trying to save the children. A natural monopoly effect of improperly incentivized professional armed defense was corrupted by anti-defense confusion directly contributing to higher death toll.

Is corrupted too harsh a word here? Consider how the “official” story changed dramatically:

Pubic demand to respond immediately was blocked by the guns expected to point the other direction. And public demand for transparency and accountability were blocked by a complete lack of scientific rigor to communications (e.g. corruption).

In the corollary of the firefighter it’s pretty clear when people are roped off and prevented from running into a burning building that it’s meant to be based in research and professional judgment about science of fire and survival.

Active shooters are human adversaries, however. When police balk at the idea of responding to a shooter carrying military assault weapons it’s far from being the same kind of “we can’t let you die trying” sentiment found in fire response.

At this point the police having guns impedes the public from doing what is just and right. And clearly the police changing their statements indicates they couldn’t figure out what to do despite having guns.

In other words police claiming they would wait on negotiators (experts at human interaction) and elite militant troops (experts at killing in close quarters) to arrive demonstrates how those who took charge of the response did not think the guns fit their bill at all. They would have been better off without those guns.

Or from the other perspective, even if a trainload of guns had showed up the police who already were awash in guns still probably would have stood outside and said “we need expertise, we need human science, we need initiative”.

Guns clearly weren’t an answer to guns for even the gun advocates, since the police for at least 30 minutes acted like something far more important was missing. It wasn’t guns they wanted.

Third, unarmed response showed up as more successful than guns (per the above point about initiative and human science). A mother convinced police to remove her handcuffs, then she ran into the building and pulled her two children to safety without harm.

Once freed, she distanced herself from the crowd, jumped the school fence, ran inside the school building and grabbed her two children. The three sprinted out of the school together, she said. […] She said she saw police tackle a father to the ground and pepper-spray another. Officers tasered a third dad, she said, when he approached a school bus with students on it to collect his child. “They didn’t do that to the shooter, but they did that to us,” Gomez told the Journal, referring to herself and other parents. “That’s how it felt.”

This is like any classic scene from a war movie where someone defies the odds to do what is obviously right with little to no relationship to all the guns blazing around.

It highlights how what mattered most was a fundamental makeup of people involved, rather than this or that model of firearm. Dependence on high quality risk assessment with the right moral framework delivered more than heavily armed defense. Adding more and more people with guns, all who can still do the wrong thing, would not move a dial at all in the right direction.

Fourth, proving this third point in an even more stark way was the arrival of a trained killer from one of the “most violent and racist” federal units.

Dropping his lunch as soon as he heard the radio, driving just 40 miles, a border patrol tactical (BORTAC) agent arrived on scene, disobeyed law enforcement orders and went directly at the threat to eliminate it.

“They don’t exist within the realm of civilian law enforcement,” Budd said. “They view people they encounter in the military sense as enemy combatants, meaning they have virtually no rights.”

That sounds like war more than just guns being present, which makes Texas look like a failed state due to its ongoing inability to regulate its guns.

Grab a gun for defense and what’s to say (in this case it was BORTAC, but there are many other units) a fed responds with prejudice? In such a context these children may as well have been in Rwanda, no? It’s apparently shaking up the “conservatives” who thought spreading guns around like peanut butter would automatically improve their quality of life.

…conservative community is now grappling with the need to square its “back-the-blue” values with law enforcement decisions that have raised serious questions about whether officers’ choices cost the lives of innocent children, delayed vital medical assistance to wounded elementary students and subjected surviving children to over an hour of traumatizing confinement with a murderous gunman…

Texas gun dealers fueling a crisis where enemy combatants generate a need for ever more guns… reminds me of how the NRA pivoted (technically in a “coup”) to bypass sanctions against South Africa and keep apartheid heavily armed and kill Black children.

Talk about poor decisions in America that nobody ever really squared, the real history of the NRA might top the list.

It’s something they actually talk about in at least Burundi. 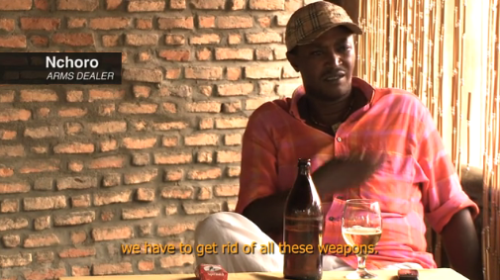 They’ve acknowledged the simple fact if you want peace you have to get rid of the weapons.

So to recap, the people officially given guns and charged with protecting schools ended up making those guns look worse than if they didn’t have them. Members of public who either were 1) unarmed rescuers or 2) highly trained killers made the difference because they read the risks (human adversary) better and responded more appropriately regardless of guns.

Armed defense theory is thus totally broken as the two things that proved viable in an unregulated gun market were having no guns (humanitarian mission to preserve life) or escalating into militant war (combat where targets lose rights).

I guarantee nobody with a child wants to live in the latter, but in both cases the obvious choice and lesson here is to heavily regulate guns (remove them all or require military training).

Update June 5th: Last Week Tonight explains how armed defense theory in America not only has been unable to decrease harms, it actually increases harms.