The National Rifle Association (NRA) has an interesting origin story that is basically 180 degrees from its current incarnation. Everything it stood for was reversed when the NRA in 1975 developed a splinter extreme right-wing Institute for Legislative Action (ILA) lobby group.

The ILA in 1977 suddenly seized complete control of the NRA, representing primarily interests of gun manufacturers. Few to this day understand the significance of the year, as the United Nations Security Council Resolution 418 of 1977 had unanimously adopted a mandatory global arms embargo against apartheid.

…all States shall cease forthwith any provision to South Africa of arms and related materiel of all types.

In other words the NRA was established after Civil War to help blacks prevent infringements of their newly won civil rights (e.g. defend against violent sabotage by white nationalists). Yet in 1977 the NRA was flipped into an organization representing violent white power groups that threaten and infringe on the civil rights of blacks even to today.

Here’s the actual paragraph from the NRA origin days, where Colonel William C. Church, founder of the Army and Navy Journal, writes “let us have our rifle practice association” meaning let him establish a NRA.

Before blacks were considered citizens, America was not democratic and expressly prohibited individual freedom. The NRA was meant to help by better enabling black Americans to preserve freedom as guardians of their democracy. That’s the real history as an executive summary.

And now for the long-form discussion:

After the Civil War ended it generally was thought (pun intended) that Americans needed to be trained better with rifles to defend the country against white supremacist rebellion. I mean U.S. citizens were expected to defend self, communities and federal government from terrorists like those who had started a confederacy to preserve slavery.

It was in this context of rifle skills that US General Shaler had noticed that on average it took nearly 1K rifle shots to stop each enemy soldier during the Civil War.

Army records for the Civil War showed that it took 1,000 rifle shots for every Confederate soldier hit during battle. In fact, the NRA’s first president, Civil War Gen. Ambrose Burnside, himself a former Rhode Island gunsmith, had this to say about Civil War shooting inefficiency: “Out of ten soldiers who are perfect in drill … only one knows the purpose of the sights on his gun or can hit the broad side of a barn.”

A UCLA law professor tried to frame it like this in his 2011 Atlantic article called “The Secret History of Guns”:

Wingate and Church had fought for the North in the Civil War and been shocked by the poor shooting skills of city-bred Union soldiers.

Unfortunately the law professor gets it right (marksmanship was the concern), while also being wrong; it was not about being born in a city, it was about race. It’s understandable why some believe cities reduced a person’s need for hunting, therefore reduced their related skill with hunting equipment. However hunting for rural communities never was a “life and death” drama that outsiders like to portray it as (crops, traps and lines work just fine with lower cost/risk for staying alive, thank you), whereas defending oneself from racist angry mobs always has been about survival.

This law professor still makes many good points about the NRA from a legal standpoint. Here, for another example, is how he hammers on the lack of any real 2nd Amendment focus in the organization.

For most of its history, the NRA completely ignored the Second Amendment. If you go through old issues of the NRA’s signature publication, American Rifleman, from the 1940s and 1950s, you can read issue after issue without finding a single mention of the Second Amendment. The organization was focused on marksmanship and hunting, not shooting down gun control.

What I find lacking in legal perspectives on history such as this is any mention of NRA core principles. What was the organization meant to do, and what did it do within its first 20 years?

Imagine instead of 1950s…go way back to when the federal military was telling emancipated Americans to take up marksmanship and hunting with rifles, to better protect themselves because in doing so they were helping to protect their federal government from regression and rebellion.

That’s more what was really going on when the letters NRA first were put together.

From the start the NRA was “a roster of Union commanders” who had just defeated angry white men trying to destroy the federal government. Training emancipated blacks with marksmanship was seen as not only viable but logical course for America to preserve civil rights won as well as maintain the country’s national security.

General Grant in 1868 did not even have to campaign for President, he was so popular. He just stated that the federal government needed to preserve sacrifices of the war (that he had decisively won) by protecting Americans from racist militias and by preventing former rebellious militants from retaking power.

Look at these 1868 choices for President and take a wild guess which side created the NRA. Hint: the left.

After the hugely popular Grant dominated the Presidential election, where 80% of freemen voted, he set about to crush the white-supremacist platform against civil rights. Consider three years after election, in 1871, it was Union military and political voices who set about forming the NRA under Grant’s administration to allow citizens to train and better protect the federal government, or at least protect selves until federal help could come.

This is why today it would be so awesome if anyone making TV shows about the dysfunction of today’s NRA would point out that the decorated “roster of Union commanders” probably are rolling in their grave because of what their federal defense concept has become. 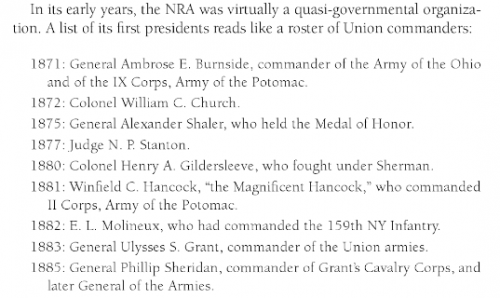 Burnside was the first NRA president and it’s worth noting his father emancipated their slaves in the 1820s, as most of the world was ending slavery.

Also note Burnside was engaged before Civil War. His bride-to-be disappeared and later showed up serving as a spy to the rebels fighting to perpetuate slavery. She infamously then got engaged to 16 pro-slavery men at the same time (saying “it is so they die happy and if they live I don’t give a damn”).

She was caught trying to fool Burnside a second time and he arrested her.

Just to go a little further on this tangent, the sister and mother of the woman he had been engaged to were both arrested for carrying large amounts of opium and morphine. The Civil War also had an element of “war on drugs” to it. With this woman’s family arrested for drug smuggling in the United States, she then shows up pretending to be British and…

I hope that gives some context to the environment where accuracy in both speech and rifle shot become paramount. This is the context for an NRA creation by Union Generals.

It is certain that a lot of people have completely forgotten that during this crazy time of privileged whites using “every trick” possible to deny blacks any rights, President Grant outsmarted them and successfully drove civil rights in America.

Grant used a multi-pronged military and civilian strategy to promulgate freedom in the truest sense, elevating America as a whole. This is what made 1871 such a pivotal time for NRA establishment.

After Grant had won on the battlefield, with far superior strategic plans than the bumbling failure General Lee, Grant was thrust into helping establish civilian models for Americans to defend themselves against residual terror cells (e.g. KKK) that were prolonging the Civil War.

In other words, when talking about 1871 as a start date, and saying “the situation shifted” for rifles in America, it was because a pro-government organization was founded as a citizen defense project to improve marksmanship of black men and…called it the NRA. 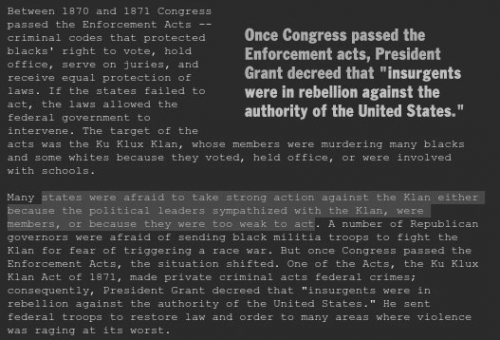 This NRA story about an 1871 equivalent of Black Panther might seem crazy and out of the blue until you also recognize that a man named Jefferson Beauregard in 2016 was appointed to head the Department of Justice (DoJ). What I mean is, when you look around more generally we’ve come a very long way from where we were in 1871.

The DoJ was created in 1870 by President Grant to fight against the KKK, also known as…wait for it…Jefferson and Beauregard’s legacy.

In case that reference is unclear, Jefferson and Beauregard were the lead traitors in their pro-slavery aggression against their own country. So now look at the news in 2016 that a man named Jefferson Beauregard Sessions III was appointed to head the department created to defeat the men he was named after.

I’ve heard in KKK rallies his name is actually pronounced Jefferson Beauregard Secession III, if that helps make it any clearer.

Even more to the point, in 1986 America hadn’t pivoted this far yet to a complete reversal. There were still newspaper headlines screaming about a man with a name intended to preserve painful memories of slavery and treason against his own country…calling him out clearly as racist after he was caught calling the NAACP “Un-American” while calling Klansmen “Okay.” 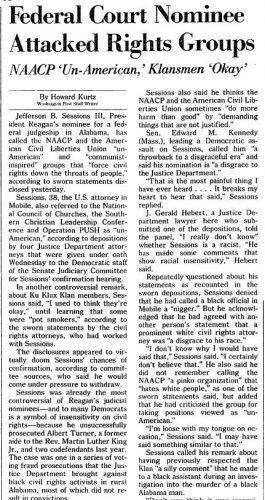 Sessions is overtly the third generation with an absurdly un-American name. Can you see here the long game of the American white nationalist?

It sure seems very significant for the US to allow someone who calls a terrorist organization “Okay” to head the agency created to destroy that exact terrorist organization. This would be like Germany electing someone named Hitler Rommel Blitzkrieg III to be their Federal Minister of Justice.

In conclusion, I hope you see how the NRA of today has flipped 180 degrees from its origin. It definitely doesn’t operate today like it did when Union Generals were aiming to help protect federal government by training black Americans to stop white supremacist militias from undoing civil rights and ruining the country.

In fact the NRA flipped abruptly in a 1977 leadership coup called Harlon’s “Cincinnati Revolt” that arguably helped prop up South Africa’s apartheid government as I’ve spoken about before.

Think about that for a minute. After 1977, the NRA seems to have transformed into an American industrial gun-running organization to perpetuate white nationalism against black populations. This literally is the opposite of its origin.

Both NRA and DoJ were established by Union Generals aiming to defend federal government from white supremacist militias. Americans should look at the history and regularly ask why these organizations no longer are serving in that capacity.