The 1942 Battle of Singapore after the Malay campaign by the Japanese is perhaps the worst defeat of British arms in history. A core technology in the battle was the bicycle, used by Japanese troops in the jungle — despite little to no prior relevant experience — in order to apply constant pressure in a relentless pursuit of defenders.

A blog post by Campfire Cycling makes a couple seemingly important points about the fearsome swarm sound made by Japanese bicycles attacking at night.

The sound of a single squeaky chain, a rubbing brake pad, or a wheel rolling on the rims is bad enough. But by the dozens and the hundreds, they sounded to the beleaguered, undermanned British troops like the lightweight Japanese tanks. Time and again, Japanese bicycle infantry advanced past abandoned British defensive points. Broken-down bicycles were an unexpected psychological weapon.

This story telling is captivating yet sounds slightly off to me. Set aside the fact the British had far more troops. Calling them undermanned is just flagrantly wrong history. The other more nuanced errors are interesting.

Were bikes really broken-down or deconstructed into a more resilient mode of operation and why? How unexpected was any effect of loud sounds from brash invaders? Wouldn’t someone realize slow-moving upright clusters of bicycles on open roads made them far easier to shoot?

Something here suggests that despite numeric superiority the British were so spooked by the thought of tanks coming through the jungle that they withdrew foolishly and could have held ground.

A quick check of 1920s records from the U.S. Bureau of Foreign and Domestic Commerce suggests bicycles predominantly used coaster brakes so that sound would have been familiar, for example.

All bicycles imported into the Netherlands Indies [Indonesia] have a coaster hub on the rear wheel without a braking device. […] Quotations are usually made for bicycles without tires.

Squeaky coaster brakes still could be ginned up to be some kind of “kiai” for the Japanese bicycles exported to countries they planned to invade, but there’s no evidence that squeaking the brakes during attack helped them.

Likewise, official ledgers of bike imports from Japan say they came without tires, which hints at the opposite of being an “unexpected” state. Dozens of tire-less bikes on roads in the dark however was so unfamiliar it was transposed into a belief that tanks were coming out of the jungle.

Moreover is rolling metal bike rims among the sixty or seventy approaching troops evidence of them trying to sound much more powerfully louder, larger or bold?

Element of surprise wasn’t their thing at all once the small groups were in a position to attack “fortified” British positions.

Seems a bit like saying loudly pounding horse-shoes in a gallop and yelling “charge” brought unexpected psychological benefits during a mounted attack against heavily fortified defenses as I’ve written about here before.

A better and simpler explanation is that Japanese Colonel Tsuji Masanobu, one of the Singapore Battle planners, had set in motion two infantry divisions equipped each with six thousand bicycles (as well as five hundred motor vehicles) to move quickly regardless of obstacles.

A violent racist and mass murderer, [Colonel Tsuji Masanobu] escaped prosecution as a war criminal with the help of American authorities and went on to work for the CIA. […] A CIA assessment judged him unreliable and ineffective.

Tsuji’s lies and arrogance served his campaign well as he stopped at nothing. Tubes or not, loud metal rims or not… war crimes or not, he pressed forward. Thus among milquetoast defenders lacking strategy and withdrawing to leaky “strongholds” Tsuji’s reckless assaults worked.

The British sloppily sabotaged supply depots, roads and bridges and the Japanese went through or around anyway because that’s what bicycles were known to do for decades before those roads and bridges existed. When conditions were blamed for flat tires, a brutality of Japanese leadership meant soldiers were expected to ride on rims.

Never mind whether brakes made a unique sound, any kind of noise would be expected to help attackers putting constant out-sized pressure on the British defensive troops who were infamously untrained and poorly led, right?

Imagine if Japanese invaders rode the “angry bee” hubs made by Chris King.

Early battle upsets came as expected from Japanese aggressively targeting Indian Urdu-speaking troops that were being led by inexperienced British officers who only spoke English (experienced and competent ones were rotated into the Middle-East).

I say expected because the Japanese leveraged an extensive “refined” intelligence network on the ground uncovering British weakness such as communication barriers. It’s hard to overstate just how thoroughly compromised British defensive positions were, especially given how susceptible British intelligence and communication lines were to murderous Japanese invaders who shifted local “support” (according to Tsuji).

When engaged in battle, the troops left their bicycles in the rear with a few soldiers on guard. As soon as the enemy began to retreat, our troops had to follow in close pursuit. The men guarding the bicycles would obtain cooperation of the Malay, Indian and Chinese residents of the locality to carry the bicycles forward to our advancing troops. Such bicycle transport units would be commanded by a Japanese soldier, not even understanding the languages of the mixture of races following him as he went forward carrying the Japanese flag at the head of his bicycle column. The men who trotted along the well paved roads, leading hundreds of silver wheels, were surely an army in the form of a cross for the emancipation of East Asia.

This weird pseudo-fascist perspective about willing “cooperation” from locals violently tortured and pressed into service is the opposite of truth and a good example of Tsuji’s lies.

Japanese aggression in Southeast Asia was an extension of the Sino-Japanese War. Among Japanese military officers and men there was a culture of prejudice toward the Chinese and other Asian people. These attitudes had deepened following the Sino-Japanese War of 1894-95 and were embedded within the Japanese population as a whole by the 1930s. […] Clearly, then, the Singapore Massacre was not the conduct of a few evil people, but was consistent with approaches honed and applied in the course of a long period of Japanese aggression against China and subsequently applied to other Asian countries.

Speaking of deception and planning for weakness, Japan allocated at least a couple mechanics to each company to repair flats, which does make it seem like they had intended to keep stealthy rubber rolling.

Yet obviously to an impatient liar like Tsuji the upside to tire repairs (averaging dozens per day) was far less desirable versus the critical need for driving forward on noisy metal before his bluster would be unraveled. Brazen pursuit of fast-withdrawing British meant slowing down for reality of tire repairs was dangerous luxury.

The Malay peninsula was in fact defined by British laying down a paved road system that meant bicycles didn’t need rubber to ride, which made it a veritable open back door into Singapore… far from being a heavily-fortified stronghold the British foolishly thought they had engineered.

“Curiously enough, throughout all these years of bickering and indecision, it had occurred to barely anyone that Malay had over 1,000 miles of coastline, half of it exposed to Japanese attack,” writes author Arthur Swinson in Defeat in Malaya: Fall of Singapore. “It had occurred to no one either that the defence of the naval base on Singapore island was bound up with the defence of the whole Malayan Peninsula.” Or, as Churchill recalled, the possibility that the fortress would have no landward defenses “no more entered into my mind than that of a battleship being launched without a bottom.”

This sounds a lot like France thinking nobody would drive tanks through a forest, opening the door to invasion. Oops. A whole peninsula of roads near beaches not only helped Britain retreat, but facilitated incoming attacks… on those noisy bike rims.

Here’s a slightly different telling from the 2015 book “The Fall of Malaya and Singapore” on page 73.

Because of Malaya’s intense heat, the bicycles’ tires blew out. However, the resourceful Japanese learned to ride down the paved motor road trunk on the rims of the bicycles. The sound of metal to pavement sounded like tanks and the peninsula’s defenders, notably the relatively inexperienced Indian troops who were terrified of armour, often broke for the rear.

The sound of metal to pavement sounded like tanks to inexperienced soldiers who weren’t sure what tanks sounded like (since there weren’t any tanks to defend and morale was linked to the false hope attackers couldn’t use them either) is the real key to this story.

Heat was certainly a known factor in local tire survival, especially given heavy loads (each Japanese soldier carried as much as 90 lbs) and of course distances traveled during the day or even night. There also may be some hidden history here if locals pressed into bike maintenance hid or sabotaged tires as a form of resistance to Japanese invasion. We have evidence of sympathizers and intelligence assets, yet not much research on the opposite.

Tire technology from before the war in any case (pun not intended) was very unlikely designed to handle demands of any military campaign, as documented in postwar reporting.

All that being said about the sound of bike rims on pavement, it is a symptom of arguably even more devastating psychological effects from technology engaged in Singapore.

Foremost was the pride of the British Navy expected to magically protect Singapore — battleship HMS Prince of Wales — quickly was disabled and then sunk by Japanese torpedoes. That turnabout alone opens a huge topic of British strategic technology planning and decline of naval strength; risks from overconfidence in large and slow “fortress” thinking versus the “101” of agile and irregular smaller forces.

Aside from such naval mistakes, also there’s the footnote that the British missed the boat on land armor. Light-weight tanks landed and maneuvered by the Japanese through jungle beg a rather obvious question why Allied armor was missing even though it could have been decisive.

The British War Cabinet (believing tanks wouldn’t serve hills and jungle, let alone have the parts and crews to maintain them) transferred hundreds from Malaya to Russia as a diplomatic lift to help defend Moscow. It was exactly this kind of refocus to other parts of the world, opening a gap in Singaporean defenses, that Japanese intelligence keyed on as their moment to jump. 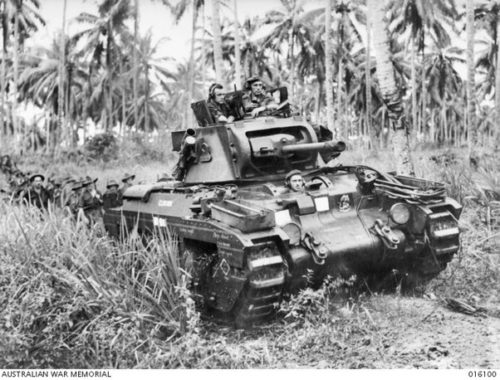 For quick comparison when a Japanese bicycle unit of about 300 moved on the Luzon Plain on Manila in December 1941 they were easily handled by defenders. Filipino riflemen accompanied by American armor made quick work of Japanese cyclists as they attempted to ride into withering fire. Even as bikes scattered or turned to ride in retreat nearly all were eliminated.

Ironically the Japanese scattered propaganda leaflets to intimidate their targets from using the kind of tactics the Japanese had just been engaged in themselves. 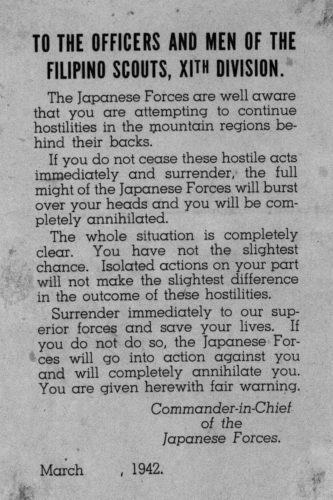 A similar scene unfolded with Australian rifle fire from the far side of a bridge in Malay; Japanese rode up exposed and many were killed before turning their bicycles around to withdraw. At that point the Australians detonated the bridge killing the rest.

In retrospect it seems likely that if the British had been more scientific in their risk assessments (not de-prioritized Malay defenses, bungled communications and made it so easy to exploit with foreign intelligence) — had they stood up any kind of competent resistance to over-confident and aggressive Japanese — rapid assault on Singapore would have failed.

Riding loud rims into battle could instead have been a story about how that made the Japanese easy targets.

In other words the “tanks are coming” thinking from bicycle rims on asphalt at night are more accurately a reference to Japanese “unexpectedly” landing tanks and driving through jungle; an outsized fear from the idea of tanks coming is what thoroughly spooked defenders into believing less was far more.