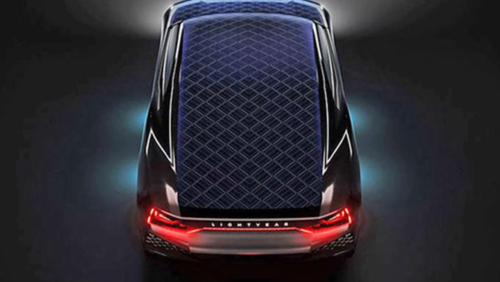 Answering the obvious question of “why don’t electric cars have solar panels” the new Lightyear wants you to take a look at theirs:

In optimal conditions, the solar panels can add up to 44 miles a day to the 388-mile range the car gets between charges, according to the company. Tests carried out by Lightyear suggest people with a daily commute of less than 22 miles could drive for two months in the Netherlands without needing to plug in, while those in sunnier climes such as Portugal or Spain could go as long as seven months.

That 44 miles estimate might just be related to the fact that an average round trip to and from work in the U.S. is around 40 miles a day. And in many cases cars just sit all day in a sunny parking lot.

Going seven months between charges might also be expressed in time saved.

If people spend 10 minutes a week filling up gas (including time getting to/from stations), or more recently time spent finding a plug and then waiting for batteries to charge, then that seven months figure could turn into hours of life not wasted.

I suppose we could argue whether it’s far more efficient to run a giant array of stationary panels with a plug, yet this misses the point about classic problems of ownership, bureaucracy and “right of way” related to infrastructure.

The U.S. has around 145,000 gas stations, but only about 6,500 fast-charging stations that can power up a battery quickly for a driver on the go.

It can take some people months just to get a charger wired into a house, let alone months or years to get solar panel plans approved by utilities who hate them.

Thus someone with a simple apartment or condo in Florida (no rights to put a charger or panels anywhere) might still want to keep a car sitting around for a week or two at a time in a sunny parking lot charging WITHOUT DEPENDING ON CENTRALIZED OR MANAGED INFRASTRUCTURE THAT MAY NEVER COME… and then drive it short distances to the grocery or hardware store.

Lightyear makes a lot of sense in places like Florida, or even Wyoming for that matter.