Tesla is drunk. Someone take its keys away.

The car company has fired up its lawyers in a completely tone-deaf and self-defeating missive in an attempt to censor people their CEO doesn’t like.

Tesla is demanding an advocacy group take down videos of its vehicles striking child-size mannequins, alleging the footage is defamatory and misrepresents its most advanced driver-assistance software.

Arguing that reporting on a crash test dummy in a car safety test is a defamatory act, has to be one of the dumbest arguments I’ve ever heard.

The test results of testing with a crash test dummy are real facts.

Guess where that leaves safety for a Tesla?

Also I must point out that I’ve given many, many talks over many years about Tesla safety shortcomings where I specifically call out their inability to see pedestrians. In many of those I clearly advocated strongly for this EXACT TEST using a crash test dummy (inflatable balloon, etc) in a street because it reveals the truth by reporting Tesla failures. 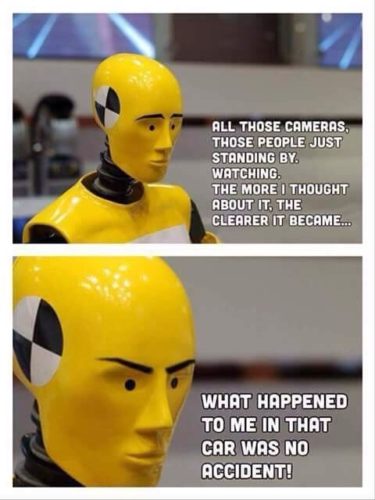 We’re talking here about an infamously outspoken unfiltered CEO who aggressively pretends to believe in absolute free speech, while in reality he sends out huge legal teams to censor people.

It reminds me of Peter Thiel (South African like Elon Musk) pretending to want absolute free speech and then sending armies of lawyers to censor people he doesn’t like.