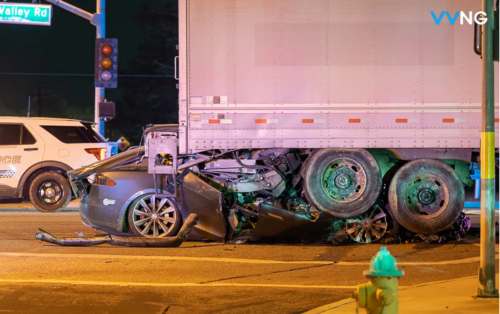 I couldn’t help but notice local news wrote their headline with a clearly suicidal tone: “Driver takes his own life in BVR Tesla crash”

A 26-year-old man has been killed in a crash on Bear Valley Road. Victorville Police say the man, who was driving a 2015 Tesla Model S, slammed into the back of a semi-truck. The accident occurred in the slow lane, going westbound toward the 15 Freeway.

Who in the slow lane is prepared for any Tesla to slam into them at 100MPH like a VBIED?

Or should I ask this another way… is there a better explanation than suicide for why someone would still be driving a Tesla, after so many have slammed at high speed into the back of a truck?

Sheriff’s spokeswoman Tricia Blake told VVNG that based on recent statements made by the victim, his last conversations, and the evidence at the scene the deputy and coroner investigator determined it to be intentional. […] The coroner’s office recorded Vieira’s cause of death as suicide on a city street.

Driving into a truck is definitely a uniquely Tesla designed way to die.

And I’m saying all this as someone who has spent decades researching vehicular suicide investigations and theory (including of course the 1930s Tatra T87).

It raises the serious question of whether mentally disturbed — angry, violent, hateful — people are being lured by “free speed extremist” branding to cause damage to themselves and society. Witnesses said there were no brakes applied, which is exactly what I was writing about recently here and here… and here.

…ethics questions of whether and when it’s justified to shoot at Teslas.

Or, perhaps even more importantly, a Kamikaze news story is why I’ve been warning since at least 2016 that any Tesla should be considered a loitering munition.

The third crash Snyder is referring to was a Tesla driver intentionally running a red light, which I’ve also written about before.