General Eisenhower wisely and famously wrote to General Marshal in 1945 that we need to protect the future by carefully documenting the past:

I made the [Buchenwald concentration camp in Thuringia, Germany] visit deliberately, in order to be in position to give first-hand evidence of these things if ever, in the future, there develops a tendency to charge these allegations merely to “propaganda.”

General Patton and others wrote similar records of disgust at what they saw, as well as concern with the German people’s ability to operate around and in these death camps as if genocide was just business as usual.

And now a smart ruling has been heard from the European Court of Human Rights that should have an immediate and serious impact to data platform safety regulation:

Pastoers’ argument that his statements were protected by Article 10, which protects freedom of expression, was “manifestly ill-founded,” given that he “had intentionally stated untruths in order to defame the Jews and the persecution that they had suffered,” the Strasbourg, France-based court ruled on Thursday. His complaint that he was denied a fair trial in Germany was also rejected by the ECHR.

The tribunal said the German had deliberately obscured some of his remarks to try to get his message across more subtly.

“The impugned part had been inserted into the speech like ‘poison into a glass of water, hoping that it would not be detected immediately,’” the court said.

An example of hidden Nazi messages in daily communications is one of the most popular blog posts I’ve ever written. Detecting it isn’t the hard part.

Acting upon it has been the bigger issue, as Google, Twitter and Facebook executive management have repeatedly and intentionally declined to block poisonous speech. They operate a philosophically and historically misguided willingness to profit as Americans from dispensing known harms that seriously damage markets around the world.

…founder, John Tanton, has expressed his wish that America remain a majority-white population: a goal to be achieved, presumably, by limiting the number of nonwhites who enter the country.

Another way of looking at this is Facebook records income from dispensing poison:

From May 2018, when Facebook began publishing its archive of political and social advertisements, to September 17, 2019, at least 38 hate groups and hate figures, or their political campaigns, paid Facebook nearly $1.6 million to run 4,921 sponsored ads. Some ads call undocumented immigration an “invasion.” Others claim that LGBTQ people are “evil.”

“This is an astounding amount of money that’s been allowed to be spent by hate groups,” Keegan Hankes, interim research director of SPLC’s Intelligence Project, told Sludge. “It reaches a lot of people with some very toxic ideologies. Obviously that’s incredibly worrisome, if not a little unsurprising given Facebook’s track record specifically around these ideologies.”

Even more to the point, Facebook has hired people into executive positions with intent to undermine democracy through dispensing misinformation:

Harbath is Facebook’s head of global elections policy. She literally worked for Rudy Giuliani. I can’t make this up.

And insider threats in data platforms who are virulently anti-democracy and who like to use hate dissemination and misinformation techniques are not something to be surprised about, as I presented at Kiwicon in 2016. 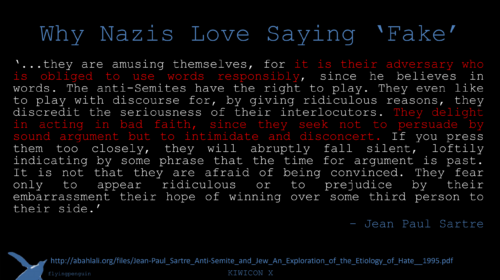 Hate groups flock towards technology positions, and attempt to insert or influence staff there, like criminal syndicates attracted to bank jobs.