Someone just suggested to me that the Spanish loved pirates while the British hated them.

This isn’t even remotely true and it reminded me how a Spanish city official (Don Juan Pérez de Guzmán, a decorated veteran of wars in Flanders) once called Britain’s Captain Morgan a pirate, using that term to insult him as those aspiring to monarchy hated pirates.

The story then goes Morgan indeed hated the exchange and was so enraged that he planned a devastatingly brutal siege of the Spanish city Guzmán defended, torturing residents and pillaging the area for weeks just to prove he was no pirate.

Here’s how one historian has referred to Morgan’s style of leadership:

Behind him were smoldering ruins, pestilence, poverty, misery and death.

A first-person’s account of Morgan’s battles was written by Alexandre Exquemelin, a doctor serving him, in a book called Buccaneers of America. Exqumelin wrote that Morgan lashed together Spanish nuns and priests to use as human shields while he attacked the Spanish military, and that he regularly imprisoned and raped women.

Captain Morgan’s vicious retort to his critics — as in the violent argument he waged upon the Spanish, burning their cities to the ground — was that he was a proud privateer in service of the British monarchy during a war (Governor of Jamaica in 1667 gave Morgan a letter of marque to attack Spanish ships).

Morgan thus ran an autocratic and ruthless mercenary operation on behalf of a Crown authority. He was accused by his own men of “cheating” them of promised wages and benefits as he pillaged cities, a military campaign he wasn’t even authorized to do (again, just to be overly pedantic, his letter of marque was to attack ships only, nothing on land).

The privateer life meant public forms of immoral service to a monarchy of questionable values (ultimately atrocity crime charges against him were dismissed and instead he received a plush reward by appointment to government, which also is where Morgan proudly owned hundreds of slaves that operated Jamaican sugar plantations).

Thus, how dare anyone accuse him of being a liberal pirate or try to imply he was fair to his followers or a representative/elected leader?

He would surely have tortured and killed someone if they did accuse him of being so democratic.

In that sense, pirates seem to have been operating somewhat as entrepreneurs challenging the brutality of unjust political systems of monarchy.

Pirates fought against those who had expressly denied human rights and trafficked in human exploitation. They weren’t going to fight in wars that benefited only a few elites, because Pirates also were known to use a democratic system of leadership based on votes and qualifications (given nobody was born into office or summarily appointed by royalty).

Privateers functioned almost in the exact opposite way to pirates while appearing similar; business operators appointed by authority who served awful political systems to exploit high-risk and unregulated markets. Privateers like Morgan operated as ruthless mercenaries in privileged positions of milking their own corrupt system for large personal gain.

Confusing? Somehow pirates have become associated with the latter when historically they have operated far more as the former.

The important difference perhaps is best explained in Chapter 8 of “The Invisible Hook: The Hidden Economics of Pirates” by Peter T. Leeson 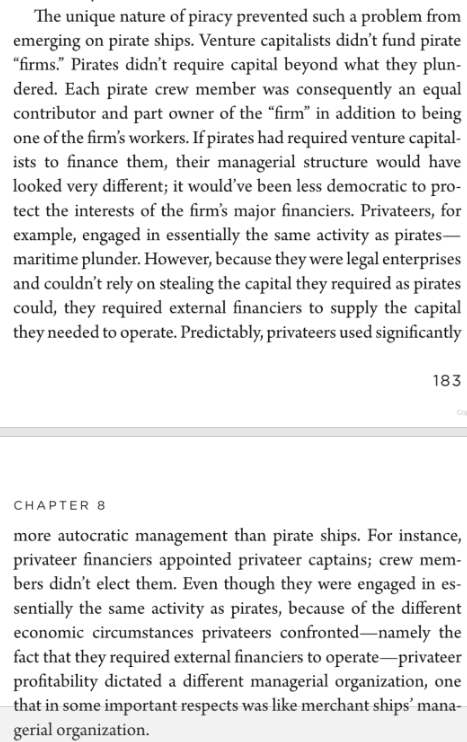 The Captain Morgan brand of liquor thus has popularized a man who promulgated human trafficking, rape, theft, murder and authoritarianism. Don’t call him a pirate. 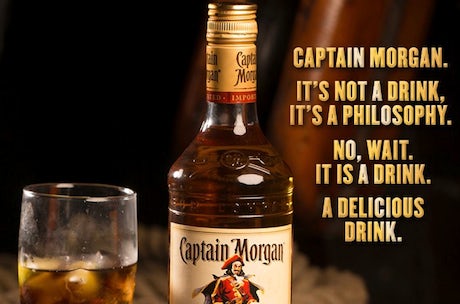 It reminds me of Hitler wine.