A FOIA request made ten months ago (Case 60495C) has just released the 1998 “Unknown Author, draft history of COMPUSEC” from the NSA 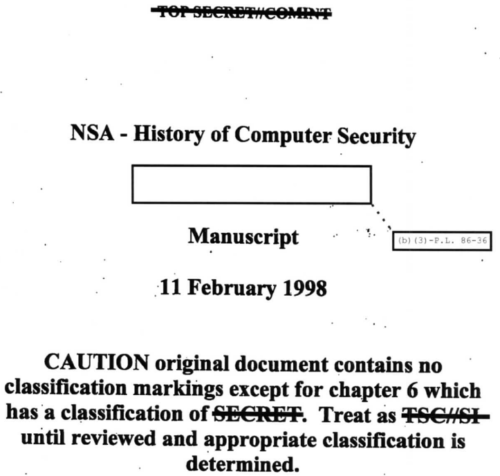 Here’s an example of the kind of juicy details to be found:

ON THE POLITICAL FRONT… in 1966, a Democratic Congressman from New Jersey, Cornelius Gallagher, chaired a special subcommittee of the House of Representatives Government Operations on the invasion of privacy. The hearings were the first of their kind regarding computer technology and the need to establish ethical and legal protection as well as technological safeguards for certain computer applications. They would not be the last!

The purpose of the hearings were to establish a “climate of concern” in regard to the Bureau of the Budget proposal for establishment of a data bank. The bank would combine all personnel and business files that were maintained by different government agencies.

The document then makes reference to one such result of the “climate of concern”: a February 1970 publication by the Department of Defense called Security Controls for Computer Systems.

Gallagher’s Invasion of Privacy Subcommittee was meant to ensure “that the Government computers do not provide the means by which federal officials can intrude improperly into our lives.” He then tried in 1969 to create a Select Committee on Privacy, Human Values, and Democratic Institutions, which failed in a 1972 political power struggle.

House committees and their chairmen do not react lightly to potential incursions on their jurisdiction, Mr. Gallagher of New Jersey discovered last Tuesday when the House defeated his resolution that would have created a select committee on privacy, human values and democratic institutions to look into potential invasions of privacy by government and industry. Mr. Gallagher’s resolution drew the opposition of Representative Emanuel Celler, Democrat of Brooklyn and chairman of the House Judiciary Committee, who argued on the House floor that his committee already was dealing with the issues that would have been handled by the new committee. Mr. Celler’s view prevailed, and Mr. Gallagher’s proposed committee was rejected, 216 to 168, with 20 New York Representatives voting with Mr. Gallagher and 18 New Yorkers siding with Mr. Celer, the dean of their delegation, and voting against the proposed committee.

In reality the committee on privacy was torpedoed by the FBI. Equifax (then known as the Retail Credit Corporation) was a staunch ally of J. Edgar Hoover. The FBI mined the data bank for background checks on their agents.

More importantly, however, Hoover or the Treasury department blackmailed and destroyed political careers of anyone who dared attempt to investigate either commercial or political privacy problems in America.

Indeed, Gallagher faced a barrage of false allegations and fraudulent claims from Hoover to block any attempts to investigate government privacy abuses. In one infamous case Hoover tried to pressure Gallagher to frame the FBI’s illegal bugging of MLK as a Kennedy plot.

Mr. Gallagher said his troubles with the F.B.I. began in June, 1966, when as chairman of a House subcommittee on invasion of privacy, he refused to sign a letter to then Attorney General Nicholas Katzenbuch demanding copies of “the authorizations for the illegal bugging” of the late Rev. Dr. Martin Luther King Jr. “and of the casinos in Las Vegas.” He said Mr. Cohn, a personal friend, had dictated the letter for his signature and had urged that it be forwarded.

The core of this debate really was civil rights when you look at who experiencing privacy violations by the FBI. Consider that Gallagher’s concerns were being aired just as FBI wiretaps and bugs targeting MLK were believed to have violated the privacy rights of over 6,000 people by 1968.

In case you haven’t heard the story, here’s a brief recap:

Hoping to prove the Rev. Martin Luther King Jr. was under the influence of Communists, the FBI kept the civil rights leader under constant surveillance. The agency’s hidden tape recorders turned up almost nothing about communism.

In fact, recordings turned bore the opposite truth, that MLK privately referred to communism as…

…an alien philosophy contrary to us.

It probably is important here to mention, therefore, that this very secret NSA history of Computer Security document made no mention anywhere of these core issues of American civil rights or the surveillance of black political leaders. And there’s only one mention of the FBI:

…the FBI file contained unsubstantiated gossip against many individuals…

Ok to be fair there are two mentions, but the other one is about the Soviets controlling an asset inside the NSA to expose intelligence information (an early Edward Snowden).