A new post about a notorious Nazi collecting ad dollars is getting banned by LinkedIn. This is what you see in the post form when you enter the URL:

And the following preview is what is reported when you submit the exact same URL to the LinkedIn “Post Inspector”. Quite different: 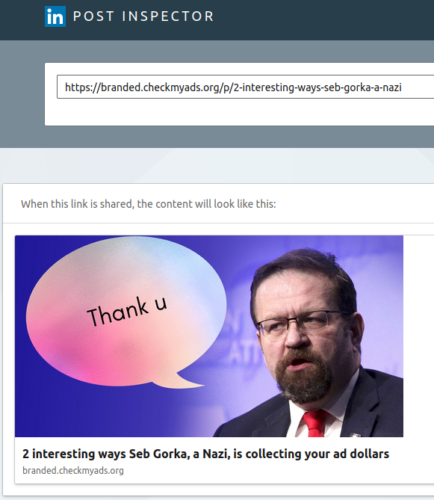 …reports point to a broader trend: a mutual affection between Western white supremacists and the Russian government. It also highlights the reality that the distinction between foreign terrorism and so-called domestic terrorism is increasingly irrelevant. Dating back to 2004, David Duke characterized Russia as the “key to white survival,” and American white supremacist Richard Spencer recently identified Russia as the “sole white power in the world.”

I recently wrote about another case. An entire major American news source was censored by an influence operation hitting LinkedIn in order to deny reporting about police lynching blacks (a form of censorship straight out of American history, if you remember the 1837 story of Lovejoy).

Here too is a curious case of speech by good guys in America being censored by… secret pro-Nazi police.

(Historian Pro-tip: I find the term “neo-Nazi” to be a unnecessary wordplay concession to Nazism, since no Nazi would ever say neo-Communist when referring to anyone today they consider a Communist)

The original post is re-posted below for research sake (e.g. you can submit this blog post to LinkedIn without it being censored, despite exactly the same content):

Seb Gorka is a neo-Nazi. This is not an opinion or a personal interpretation. It’s a well-documented fact.

He has worked closely with antisemitic politicians and written for openly antisemitic newspapers. He has publicly worn Nazi insignia. When asked about it, he has said he inherited the insignia on the “merits of [his] father,” who was a member of the Hungarian neo-Nazi group the Vitézi Rend. There is strong evidence that Gorka himself has sworn a lifetime oath to the group.

If that isn’t enough, he publicly incited and encouraged the January 6th insurrection, claiming that “patriots” have “taken over Capitol Hill.” He has also publicly promoted voter fraud disinformation on his website, SebGorka.com.

All this makes him extremely — as we like to say in the advertising biz — brand unsafe. Even YouTube has banned him. But that hasn’t stopped Seb Gorka from running a profitable disinformation outlet. With help from a handful of adtech companies that either don’t know or don’t care about where your ad dollars go, Seb Gorka is cashing in.

How is this happening? There are two ways: an obvious way and a less obvious fraudy way. We’re going to explore both of them here. Grab some popcorn, we’re going to defund a Nazi today, folks!
1. The normal, regular ad placement method (simple!)

Ad placements are the obvious way SebGorka.com makes money. The following companies are serving ads on SebGorka.com, in violation of their own Publisher Policies and Acceptable Use Guidelines:

How do we know this? We hovered over the ads and took screenshots. You already know how all this works. It gets more interesting from here.
2. The shady revenue-sharing ring method (sketchy!)

SebGorka.com also monetizes by using shared DIRECT IDs — an ID meant for one publisher — across a shared pool of unrelated websites. This practice not only artificially inflates its CPM rates (cost per thousand impressions), but also allows it to get paid untraceable sums of money by an LLC.

Let’s break this down together.
Remember ads.txt?

We’ve talked about ads.txt before, but it’s important for us all to understand what a hot mess it really is.

Ads.txt is a protocol developed by IAB Tech Lab to bring transparency to the supply chain. An advertiser should be able to cross-check a publisher’s ads.txt directory against each exchange’s counterpart directory, known as sellers.json. If the data matches up, this tells the advertiser that things are fine.

In theory, these two specs allow advertisers and ad exchanges to verify that their ads are being placed on the correct inventory and that they’re paying the correct company. Here’s what this is supposed to look like when it’s working:
This screenshot is from CredCoalition’s ads.txt research, linked in the intro

In sellers.json, sellers can list themselves as one of three Seller Types (“seller_type”).

Publisher: If a seller is listed as a PUBLISHER, that means

the publisher owns the site

the money you spend is going directly to the publisher

Intermediary: If a seller is listed as an INTERMEDIARY, that means

the seller is paid indirectly for inventory

Both: The seller has been approved by the ad exchange both as a PUBLISHER and INTERMEDIARY.

Why does any of this matter? Because advertisers are willing to pay a premium for DIRECT and PUBLISHER ads because it signals to them that they have 1) a higher quality audience and 2) less potential for fraud.

But in practice, publishers like SebGorka.com have correctly surmised that ad exchanges aren’t performing the necessary checks — which means they’re able to declare themselves DIRECT and PUBLISHER across an unlimited number of websites and funnel the revenues into a single shared account.

In Australia, this is formally recognized as a form of ad fraud, and is illegal. In America, this is still just uh… fraudy.
Here’s what we found in SebGorka.com’s ads.txt

We looked at the DIRECT IDs on SebGorka.com — and it tells us an interesting story:

SebGorka.com is sharing DIRECT IDs with a number of local CBS, ABC, and NBC news affiliates.

Frankly Media LLC appears to be employing these shared DIRECT IDs for lot of publishers. Check out this list of Google results for just one ID.

And in the middle of it all are the ad exchanges.
Here’s what’s going on in SebGorka.com’s ads.txt

The following companies are allowing mislabeling, which lets publishers get away with misrepresenting themselves and misleads advertisers into thinking they’re paying for direct inventory when the reality is anything but:

It’s fraudy because: Frankly Media LLC is not a DIRECT seller of SebGorka.com.

It’s fraudy because: Engine Media is not a DIRECT seller of SebGorka.com.
Is Frankly Media LLC a dark pool sales house?

It sure looks like Frankly Media LLC has been going around to all the ad exchange and telling some fibs.

They’ve told some of them that they own and operate SebGorka.com — but they don’t. They’re telling others that they are both PUBLISHER and INTERMEDIARY for SebGorka.com — and that’s not true either (SebGorka.com is owned by Salem Media Group).

But one thing is probably true: Frankly Media LLC and/or its parent company Engine Media Holdings is making payouts to SebGorka.com. But how much? This is where we hit a dead end.

Frankly Media LLC is what we call a dark pool sales house. We don’t know how much it’s earning for SebGorka.com through this revenue-sharing ring and we don’t know how it’s distributing the collective proceeds across its members.

Maybe they have a profit-sharing contract? Maybe they pay out SebGorka.com through yet another shell company? Anyone looking at these records would never know.
So what do we do now?

What we’ve just uncovered is a Nazi infiltrating the adtech supply chain through the very pipelines designed to keep someone like him out of it. If Frankly Media LLC can use the same DIRECT ID across NBC affiliates and a Nazi’s media outlet, we are in trouble.

Last summer when we first reported on ads.txt revenue-sharing, we noted the national security implications of not knowing where our advertiser dollars are being funneled:

One of the reasons that this is still legal, or not explicitly known to be illegal, is that ads.txt is only three years old and there hasn’t been, to our knowledge, any major investigative research into the consequences of its design… Ads.txt is a global standard, used in international markets. This giant security hole opens markets and mediascapes around the world to foreign propaganda, hate groups, money laundering, and, of course, fraud.

Once again, it’s up to us, the advertisers, to take charge of our own ads. If you want to keep your ad budgets away from Seb Gorka, you will have to add the website “SebGorka.com” to your exclusion list. You will also need to block Frankly Media and its DIRECT seller ID’s. You can find them at sebgorka.com/ads.txt.

NOTE: Originally, the first sentence of this post said “Seb Gorka is a Nazi.” We have updated this to read “neo-Nazi” because it is debated whether the word Nazi is a general term for someone’s ideology or if it refers specifically to a member of the historic National Socialist German Workers’ Party of Germany.