Announcing the Journal of Online Trust and Safety… The journal was conceived from a recognition that much of the cutting-edge research on online harm lacks an appropriate journal for publication.

An “appropriate journal”? What was wrong with what people were publishing already? Hold that thought.

Notably, here’s the lineup written in the PR piece, claiming “a wide range” of researchers.

Led by co-editors Stanford, Stanford and Stanford. Stanford will be the journal’s initial managing editor. Founding members of the editorial board include:

Why so much Stanford? Do I need to create a pie chart here?

Perhaps “appropriate” was a sloppy way of saying… content tightly curated by friends of the Facebook CEO working as censors in a Stanford-based front funded by the company to undermine critics?

Such a tyrannical mindset sure sounds eerily similar to the Facebook origin story.

And who genuinely thinks any “Online Trust and Safety” journal should have a disgraced name like Stanford on it at all given their history?

Let me propose another way of looking at this.

Reports have been coming in that Facebook ironically (and fraudulently) banned independent researchers working on transparency. They’re literally shutting down cutting-edge research on online harm and censoring independent publications, as their arm at Stanford complains an “appropriate” place to publish is needed.

Facebook bans academics who researched ad transparency and misinformation on Facebook. The researchers say their work is being silenced.

And here is Input today based on Bloomberg yesterday:

Facebook banned researchers who pried into its ads and misinformation. Sure, go ahead and research us. But, um, you can only look at the data we’ve cherry-picked for you. Hope that’s okay.

Facebook claims the accounts were shut down due to privacy problems with the Ad Observer. In our view, those claims simply do not hold water. We know this, because before encouraging users to contribute data to the Ad Observer, which we’ve done repeatedly, we reviewed the code ourselves.

Facebook lawyers aggressively shutting down researchers while their Stanford arm announces a publication house for researchers… begs motive. So let’s talk about that too now.

Is the motive to coerce independent researchers into giving up their independence, to stick them (pun not intended) under a heavily weighted editorial group funded by Facebook?

At least one NYU researcher complained publicly via Twitter as well. 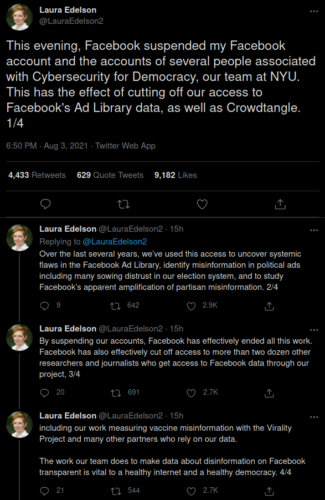 And so perhaps the most important point of all is when I reveal the names behind the unbalanced weighting of the editorial board, guess who is from NYU?

That same researcher. Laura Edelson is being listed as someone under the heavily weighted Stanford board.

There’s appears a very good chance that by gluing her into a Facebook-staff run Stanford controlled forum, she rides for a while in an illusion of being included in a process… while it is tightly controlled by people entirely opposed to her independent thoughts.

And what is everyone researching? 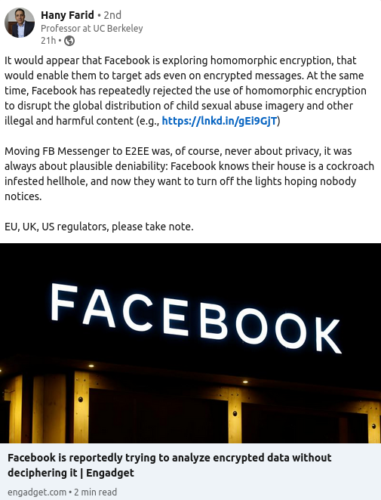 The “cockroach infested hellhole” was left behind by… the same Facebook executive who now is running the Stanford-controlled journal that he is claiming to be the only “appropriate” place to reveal the depths of his “hellhole”.

Guess where Henry Farid will soon be working? He also is being listed as someone under the heavily weighted Stanford board.

Remember that highly offensive Stanford logo at the top of this post? That’s their official “mascot” trying to chase and kill… the mascot of Farid’s academic affiliation.

The PR piece from Stanford has all the hallmarks of deep corruption, a reminder of how Arthur Anderson auditors ended up in a “very special” contract to “help” Enron.

…she told me blowing the whistle had been like telling the Titanic captain “we’ve hit an iceberg, sound the alarm, come up with a plan” but the response was “icebergs don’t matter, we’re unsinkable”. I went on to report on the fraud trials and convictions in 2006 of Enron’s chairman Ken Lay and CEO Jeffrey Skilling.

Now imagine instead that Farid and Edelson found some actual “acceptable” publishing venue outside the direct influence and control of Stanford let alone the men they’re directly criticizing.

I mean imagine the CSO of Facebook was being held accountable as the Enron executives were, instead of running a speaking tour from an academic office to profit even more from the alleged crimes he facilitated.

America just might have a longstanding and widespread problem with these kinds of platform-based censorship tactics, just maybe.

It also reminds me of an American school that named itself after a traitor — the ruthless butcher named Robert Lee who fought for race-based tyranny — yet tried to deny a teacher the freedom to say that her students’ lives matter.

The school can’t both hold up a “policy prohibiting teachers from advocating for social or political causes” while calling itself a Confederate South academic platform.

Using the artifice of being an academic space in order to silence critics should be called out for what it is — censorship.