There are so many weird twists to this story, I don’t know where to begin but of course I had to write something.

First, maybe start with the fact that the victim is a vision-impaired Paralympic judo athlete.

Vision-impaired world-class self-defense expert is no match for a car also vision impaired that was given just one simple job — drive in a circle and don’t run into anyone.

Second, the victim is Japanese, the self-driving car is Japanese-made and operated by Japanese… and on top of all that the athletes’ village is a completely planned “safe” zone in Tokyo, Japan.

This was the opposite of complex operating environment. Toyota was operating in a tightly controlled and simplified transit model.

It even had designated crosswalks so athletes could be charged with jaywalking.

Third, early versions of the “operator” safeguard story made no sense at all. Here are two sentences from the same story just one paragraph apart:

Let’s hope this gets clarified at some point soon. Did the car actually try to avoid a person and the humans looking at that same person push the car to hit the victim instead?

That seems totally weird and improbable as an explanation… like someone is being paid to take the blame for a robot weird.

Fourth, there’s some detail around the car seeing a security guard close to the intersection but not seeing the athlete. That contradicts the story of the operators forcing the car to hit the athlete.

But in any case, what is the point of a security guard if not to protect against killer robots attacking the athletes?

It might sound farcical, yet we have to ask what if these robots were used strategically to alter the outcome of sporting events, or make a political/terror message on a world stage?

He fell, suffering bruising to his head and leg, which will apparently require two weeks of recovery time. He was meant to compete in the judo 81-kilogram division tomorrow and it’s currently unclear if he still will.

There’s a lot of money in trying to affect the outcome of matches at the highest levels. Not saying it’s likely, just that it pokes a big hole in the narrative of observing a security guard and stopping but then running over the guarded athlete anyway.

Their official statement then tried to clarify all the noise.

The vehicle’s sensor detected the pedestrian crossing and activated the automatic brake, and the operator also activated the emergency brake. The vehicle and pedestrians, however, came into contact before it came to a complete halt.

Both the vehicle and the operator tried to stop the car after it detected the victim. That’s almost believable, as it suggests the vehicle was going far too fast (e.g. a hand-off system from car to human isn’t going to work).

Perhaps more interesting is how Toyota is talking about restarting the service by putting all kinds of human controls around the robot.

Operators will now be given control over how fast the vehicles travel with two safety staff members, rather than one, on board to look out for pedestrians, a Toyota spokesperson said. Warning sounds on e-Palettes will also be turned up and pedestrian guides at busy crossings in the athletes village will also be increased to 20 from six.

And twenty-two guides at each crossing to protect humans from robots? That’s a LOT, including two inside the robot to look for people and override its decisions.

In the same vein as GM and Uber, Toyota said after this tragic accident their operation was shutdown for complete review and you can see the attention to safety.

Stark contrast in tone compared with the rather obvious immorality of Tesla, which has killed more and more people and appears to have no intention of slowing down for anyone or anything (except police cars, since it crashes into them). Seriously, there are 9 confirmed Tesla Autopilot deaths as of July 2021 and many more still being confirmed. 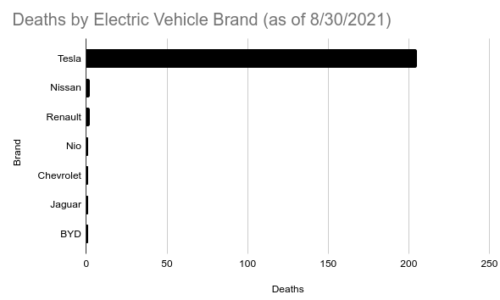 You might be wondering about the number of Tesla versus other electric vehicles on the road. Here are the latest ranked sales numbers for perspective in 2021:

A summary of the other top brands all combined comes in at 59,473 with a total of just 3 deaths.

You might also be wondering about other non-electric models and their numbers. Here’s how IIHS lists driver deaths (PDF) per million registered vehicle years: