Since I wrote a post a few weeks back — looking at the huge Fiat EV sales numbers in Germany — I’ve been curious about the Stellantis rise (Fiat is a Stellantis brand).

It seems odd that Tesla is soaking up headlines in Germany while failing to deliver, shooting itself in the foot and above all lacking innovation for the tenth year in a row. Nobody meanwhile is writing about the Stellantis revolution delivering amazing results.

The Stellantis boss plans to launch 75 new fully electric models by 2030. The group’s annual sales should double by then to around 300 billion euros – with a double-digit return on sales.

Another one of Stellantis’ brands dominated last month’s EV sales in Germany, for example. This time it’s the French “DS” that takes honors.

Germany’s Kraftfahrt-Bundesamt (KBA — motor transport authority) published new figures that show DS registrations in November were up 301%, followed by MG with registrations up 124%, and then Audi up 109%.

That is a huge jump.

I’ll be honest, I know very little about this DS brand even after reading the October press releases.

Looking at the “luxury” marketing I don’t immediately see the DS appeal versus a Polestar, for example. 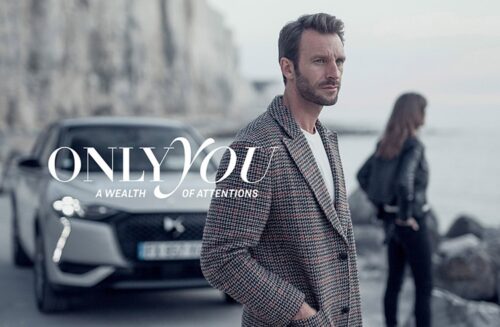 “Only you, a wealth of attentions”?

Why is that all-black faceless woman staring into oblivion while the “only you” is a white man in white? Is that an apparition, like he’s meant to be seaside for mourning the death of his mistress?

It must sound and look better in French, or French translated into German.

My guess is this new DS EV is an amazing feat of engineering that sells itself because the marketing is… let’s just say “schnauzer”.

Since nobody seems to be writing about the DS having huge appeal in Germany, it’s even more curious how they’re crushing very recognizable and highly curated brands like VW and Audi.

It kind of reminds me how Tesla somehow manages to splash itself into Norwegian news, while the modest Nissan LEAF like Stellantis has quietly dominated that country’s all time EV sales.

The story of Nissan’s LEAF, the world’s first mass-market EV launched a decade ago, is woven into Norway. In 2018, for example, it was the country’s most-sold passenger car. A 2020 survey of 14,000 EV drivers in Norway – thousands of them Nissan LEAF owners – showed that nearly 95% are satisfied with their cars and 66% are encouraging their friends to follow their lead. Maria is definitely one of those drivers. “For those who have not yet switched, try this car. You won’t regret it,” she says. “As soon as you drive it, you’ll see how wonderful it is to drive a Nissan LEAF.”

Seriously, there’s great EV stuff going on if you look at the real numbers instead of cooked ones from the Tesla propaganda pulpit. Let’s see some more talk about super cool Nissan innovation for Norway’s snowy roads, engineering that fundamentally changes an EV that Norwegians buy the most.

e-4ORCE offers a powerful and controlled drive with a lightning-fast response and smooth acceleration with ultra-high-precision control at 1/10000th of a second. It guarantees driver and passenger comfort and steadiness while delivering thrill and velocity matched with a sports car.

One thought on “German EV Sales Dominated by DS, MG and Audi”