California has finally passed a law prohibiting careless promotion of a car as fully self-driving when that car is incapable of self-driving.

Everyone knows what car company is in trouble when we talk about full of shit driving (FSD) technology.

The California law seems pretty clear, and also evidence that Tesla has run out of time.

Half a year later in 2016 he sounded like this:

The Tesla CEO spoke at the Code Conference on Wednesday night and predicted that we’re closer to self-driving cars than anybody thinks. “I think we are less than two years away from complete autonomy, safer than humans, but regulations should take at least another year,” Musk said.

By the way, “regulations should take at least another year” means what? It’s an anti-government jab based on nothing. A subtle reminder that Elon Musk’s statements are fluffy nonsense meant to confuse and excite listeners.

Even worse, of course, is that when 2019 rolled around Elon Musk didn’t get charged with committing fraud and Tesla products were not shut down.

He instead was emboldened, taking a “catch me if you can” tactic and expanding the lies as if nobody would stop him if he added more outlandish claims.

Deadline long gone, missed entirely, he says this on stage in 2019:

We expect to be feature complete in self driving this year, and we expect to be confident enough from our standpoint to say that we think people do not need to touch the wheel and can look out the window sometime probably around the second quarter of next year.

Feature complete yet it won’t have necessary features. Nonsense.

Here is how journalists reacted to his presentation in 2019:

Musk estimated that by the middle of 2020, Tesla’s autonomous system will have improved to the point where drivers will not have to pay attention to the road. […] “A year from now, we’ll have over a million cars with full self-driving, software… everything.” These cars will be Level 5 autonomy with no geofence, which is a fancy way of saying they will be capable of driving themselves anywhere on the planet, under all possible conditions, with no limitations.

That egregious lie about delivery is not even the worst of it. Here’s more from 2019.

“My guess as to when we would think it is safe for somebody to essentially fall asleep and wake up at their destination? Probably towards the end of next year,” he said. “I think we will be feature complete, full self-driving, this year — meaning the car will be able to find you in a parking lot, pick you up, and take you all the way to your destination without an intervention — this year. “I would say I am of certain of that. That is not a question mark.”

Elon Musk was encouraging people in the very near future to fall asleep at the wheel.

And when that 2020 toxic fairie dust prediction failed, here he ramps up in 2020 again.

I remain confident that we will have the basic functionality for level five autonomy complete this year. There are no fundamental challenges remaining.

It’s like Elon Musk telling journalists that he expects to have basic functionality for brain surgery complete this year because he can handle a turkey carving for Thanksgiving.

And he callously boasted about all fundamental challenges to road safety being gone already in 2020.

That seems like an especially dangerous statement that would confuse buyers; directly result in death from use of his defective products.

Tesla “driverless” still in 2022 is repeatedly failing the most basic tests like staying in the road and driving the correct speed (lane assist + cruise control).

Other car brands with superior sales numbers have zero crashes at all to report, while Tesla’s “driverless” software crashes so often it has been implicated in over 50 deaths.

Lies and lies and more lies…

Fast forward (as it’s so rediculous we even have to talk about such lies repeating year after year) and Tesla’s self-driving right now is a literal disaster with tragic investigations into hundreds of crashes.

The investigations come despite excessive censorship by Elon Musk, including attempts by Tesla to demand anyone using FSD be prevented from talking about their experiences.

Tesla employee John Bernal (YouTube: @AIAddict1) was fired in February 2022, for example, after he publicly shared a video of FSD crashing into a safety pylon.

Tesla announced on November 24 it expanded its version 10 “beta” (10.69.3.1) self-driving software release to everyone in North America. Hours later a major crash of eight cars in SF was the headline news, not to mention a crash and explosion in LA.

Version 10 still gets called a “beta” to avoid accountability, announced to everyone as a production milestone to gin up credit, right before being implicated in major crashes on public roads.

Let that gaslighting sink in.

And also don’t forget the CEO told Wall Street in January 2022 that a version 11 “beta” was just weeks away from release, and then just said the same thing in December 2022 as if nobody sees the fraud. 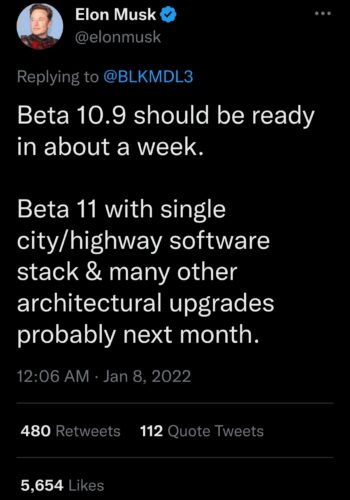 This prediction for a December release also came after he chided people that he thought v11 already had been released the 11th day of the 11th month at 11:11 Pacific time.

No other car company so flagrantly flails at truth like this, yet you can be sure all of them are watching and wondering how much longer Musk’s crimes will pay.

Thus, as everyone surely knows, Tesla since 2016 has repeatedly falsely marketed itself delivering self-driving in the coming year or two, sadistically increasing pain with zero connection to reality of their promises.

Reality has been a rise in death caused by Elon Musk peddling unsafe design flaws for profit.

10 out of 10 “Driverless” Fatalities Were Caused by Tesla

Tesla autonomous technology 2.0 was worse than 1.0… everyone with integrity ran from the corruption.

Mobileye, world leader in autonomous driving, was blunt in 2016 about willful negligence.

Mobileye reveals it split from Tesla over Autopilot safety concerns.

NVidia was unfortunately far more diplomatic in 2018 when they called out Tesla management as liars and thieves.

Musk said Tesla’s [copy of NVidia] was 10 times faster than Nvidia’s at the same cost. Nvidia, though, has announced its own next-gen chip for autonomous driving called Pegasus, also with 10 times better performance.

Soon after that, NVidia published a study that ranked Tesla’s cheap knock-off engineering culture as least capable of all car companies.

Indeed, the Tesla CEO falsely claimed in his trash-talking split with NVidia that he was developing a vehicle computer that would never crash. The results are in and even brand new Tesla owners are terrified:

…if you are driving, and the computer crashes, which it has done many times, you are left with a blank screen – and no way of knowing what your car is doing.

Under a permanent improvisation culture of an unaccountable chief executive, Tesla safety quality declined with each year such that late releases of FSD software has been documented as more dangerous than ever.

Baseless future-leaning statements served both to artificially inflate stock value as if self-driving basically was delivered; yet also Tesla self-contradicted promises of near-term delivery by calling them longer term aspirations (to avoid blame for failing to deliver what they promised to wall street, while killing so many people).

It’s a simple tactic of criminals, known often as advanced free fraud (AFF), where victims are lured into paying into promises about fantasy returns that never can be realized.

Instead of the typical AFF scam email from an “African prince”, the South African CEO of Tesla promised people enrichment from giving him their money. Then they saw their car depreciate faster than the market average, if the car didn’t burn itself up or worse, and none of his promises came true. 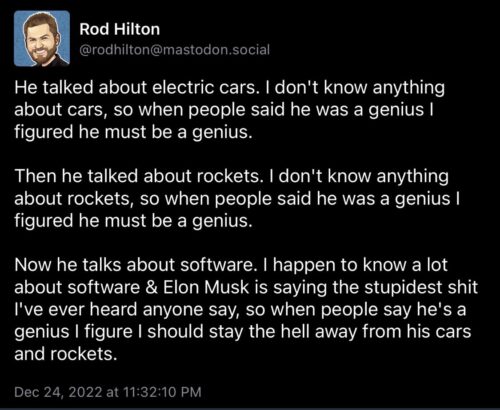 California has just laid down a regulation ten years overdue.

There is no evidence Tesla has any clue what to do next, which is sadly consistent with their cars lacking real innovation since they first licensed and then stole a 2003 EV design.