Marc Polymeropoulous has published a new leadership book. He describes it as a revelation about his failures in the first two thirds of his career, which he then credits for making him into a good leader in the last third of his career.

These things stuck out for me in his CSPC interview (118 views):

He refers to intelligence like going to bat in baseball, where a .300 hitting average is great even though we know it’s a 70% rate of being wrong. I actually like this as I tend to define intelligence, especially artificial intelligence, as the ability to hit a target.

An example he gives of this is chilling, however, since Marc’s best agent in Afghanistan was tortured and killed because of a very simple and predictable operations mistake.

Maybe then the 70% failure rate in baseball is not really applicable more widely in other fields, especially high risk ones. Instead such standards of quality in sports are ok to be low because by design outcomes shouldn’t really matter — it’s just a game.

As Calvin and Hobbes put it a long time ago, next to their snowman made from only two balls, “the fastest route to success is lowering expectations”. 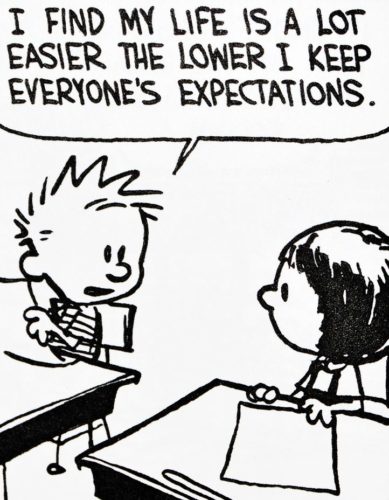 Something tells me the .300 might need to go way up to a number more like .900 when lives are on the line every day, because nobody should want to go to bat repetitively knowing they have an over 70% chance of death. But who in history has ever batted .900? That’s where gaining an upper hand using modern information warfare comes in, right?

Even more confusing is “employ the dagger”, a notion Marc offers the audience as evidence that “competition is good”. He says when officers did something desired he would award them a physical token of appreciation, a souvenir knife he’d buy at the market for $10.

In corporate circles this is a well-known tactic. Give people a snow globe after x years of showing up to work and they’ll work more, right?

In baseball I guess this is the idea that a coach could give out a $10 trophy bat for hitting a ball, instead of expecting the team to find enough satisfaction in achieving a 70% failure rate.

It’s thus interesting to see him conflate a well-tread concept of internal appreciation and reward systems to affect morale with a raw “good” of competition. What if the competition is toxic because teams are in fact killing each other instead of targets?

Something obviously sounds not right about generic praise of competition. Perhaps Marc is using some kind of over-compensation act (surrounded by hyper-competitive personalities in the killing fields) to cover up his softer anti-competitive leadership messages of inclusion and unity.

He’s obviously a master at fitting in. I wonder if him floating these ideas about 1) pointy sharp tool and 2) competition is meant to disguise his true message that is rather blunt and collaborative.

There is neither any uniqueness or shortage for such inexpensive daggers (hey, even I have at least TWO from my time in Nepal) nor any real scarcity to his approvals. Competition for an award and attention isn’t a fair description of any system that could operate just fine without using any competition (with each other) at all.

He goes on to say his leadership success grew by including more people into communications, a larger tent for collaboration. This suggests he valued the opposite of pressing everyone into competition (e.g. bringing finance officers and kitchen chefs into his planning).

From there he digs further and hits the empathy button hard, which takes the listener further from his opening salvo on competition culture.

In other words, he’s basically saying competition works if people are kind instead of selfish, aligned instead of oppositional.

His big tent mindset (he calls out nostalgically for everyone in competition to hold a sense of unity) combined with his points on empathy and repetitive reference to humility being a core ingredient for great intelligence… it all seems his love of competition comes with some pretty huge caveats.

Humility is presented as competitive advantage in intelligence — hitting a target without pride or arrogance, just like some African tribes have advocated for thousands of years.

When a young man kills much meat, he comes to think of himself as a chief or a big man – and thinks of the rest of us as his servants or inferiors. We can’t accept this … so we always speak of his meat as worthless. This way, we cool his heart and make him gentle.

While Marc’s leadership advice sounds good in principle, there’s a moment in the interview where he boasts about delivering news of a successful assassination. Oops.

Such hubris about targeted hits not only is a swing and a miss according to his own doctrine, it’s unfortunately a widespread problem he could be making worse. Just look at some of the latest American Army PSYOP and Department of State messaging (while Frank Church rolls in his grave).

In all seriousness, how would baseball exist if hyper-competitive batters could assassinate a pitcher, sort of like how Walter “Steel Arm” Dickey was killed in 1923 with a dagger?

By the time he was 17, he was a pitcher who threw so hard and fast that he gained the nickname that followed him the rest of his life. […] “He was as good as I ever saw throw a baseball,” Roy recalled to James, “I remember one time that Steel Arm brought in his whole team to the dugout. No one was left except him and the catcher. He then struck out three straight men, daring them all the time to hit. They could not do it.

Such questions about lawfulness in competition bring to mind the lessons behind a song called “Move on Up” as well as a film called The Rubble Kings.

Humility in the context of American history in fact might serve as an excellent gateway into discussing rule of law being far more important to real success in intelligence than arbitrary displays of power.

As an afterthought, has anyone at the NSA ever said humility is a good thing?