Early in my political science studies at Macalester college I remember vividly my professor arguing America promotes football because it legitimizes displacing human rights by celebrating machine-like boxes of industrialized (minimal judgment/power) behaviors… a memory I’ve hinted at before on this blog in 2007.

Instead of continuous movement of humans free to learn and achieve within an open market of opportunity, it’s locked up with short measured “plays” written by a bureaucracy of “programmers” serving the “owners”.

The best people can ever achieve leaves them treated like owned and controlled assets in a dystopia that Kafka might have had in mind when he wrote The Trial. Or as Erich Fromm put it in The Sane Society

If the machinery of football sounds even remotely like slavery to you (or tyranny for that matter), then you won’t be surprised to hear the following comparison in the news:

As the white owners later start lashing at the Black players with whips, Kaepernick then draws a comparison between the abuse suffered by slaves to the NFL Scouting Combine – a week-long showcase that determines which prospects are drafted into the league.

Of course this is going to outrage anyone who loves the game of American football. Nobody likes being called out for slavery practices, especially those engaged in slavery practices. And perhaps the best thing that can be said is how every sport may be just a stark reflection of extant power imbalances in society. In the following paragraph the writer is talking about soccer (what the world calls football):

Could the “beautiful game” really have a hand in such an ugly business? A few moments of reflection later, I was able to uncloud my judgement. Modern day football is as beset by corruption as US Foreign Policy, and a summary glance at the track record of the figures whose money courses through our game — from Abramovich, to Berlusconi, to Shinawatra — is enough to hammer home the unsavoury links between crime and modern sport.

Just look at how someone described boxing as “destroyed” by Civil Rights, without invoking the loaded word slavery:

“Boxing is for poor people who don’t have any other alternative to make their way in life,” Pacquiao and Ali’s promoter Bob Arum said. “We can’t get white middle-class kids into boxing. Let’s be honest: No parent in their right mind is going to let them come to a gym. I wouldn’t let my kid go into boxing.”

The golden age of boxing is considered to have lasted from the 1920’s to the 1960’s. The end of this great era was marked by the Civil Rights Movement.

In the aftermath of the Civil Rights Movement, African Americans were awarded more rights, and chose to enter safer professions, completely destroying what used to be the major source of excellent fighters across the United States and beyond.

When the death toll of fighters rose and new discoveries about the trauma that arose from many devastating blows to the head, poor African American kids trying to escape poverty and create a name for themselves from fighting realized that there were a better alternative in other a number of more mainstream sports such as basketball and football.

Like boxing, football players are kept in a box. Unlike boxing, however, it also has a highly regimented and structured system of brief mechanistic “plays” with almost no freedom at all even inside the box.

It is measured precisely and controlled by industrial-era authority where players are owned assets — machines meant to run as they are told and do little more.

You’ve surely heard of the famous Oregon Trail “game” where a series of decisions could be made to achieve success? It popularized an image similar to the one below. 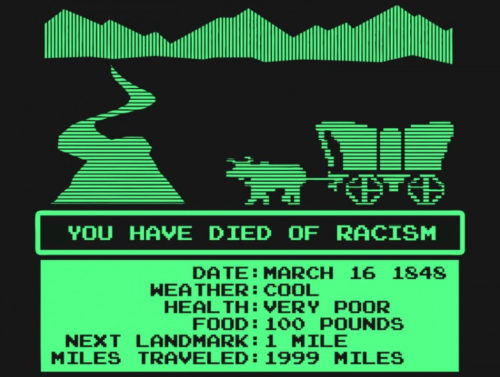 I mean can you imagine an American “game” based on choosing a series of winning “plays”, which could display the kind of honesty found in the following actual racist history of Oregon?

Burnett composed Oregon’s infamous “Lash Law,” which stated that any freed “negroes” or “mulattos” in Oregon would have to leave or be publicly whipped until they did.

So is football better than boxing?

Was Oregon’s “ban on slavery” better than its ban on Black Americans from being allowed to enter the state under penalty of being tortured to death?

I can see it now; someone might read this blog and say “but Blacks trying to settle in Oregon chose to be tortured to death because they didn’t take a different career path”.

Football isn’t looking great either, thus hardly any real escape from the same exact lack of choices that led to boxing.

High-profile NFL players have gone on record saying they don’t want their children playing at all because of the concussion risk.

But wait, it gets worse:

A statistical manipulation that underpaid Black players in concussion settlements exemplifies American football’s immersion in the legacy of slavery.

However, just like with the history of American slavery, some people really try hard to make it seem like there’s some kind of choice where one really doesn’t exist.

First of all, football players are millionaires? Very few of all the players who try make it to the level, and by the time they do they are terrified to criticize the system they just risked everything to benefit from. I mean, come on.

People hope they will make money yet they often get destroyed on the way; such that if they haven’t been destroyed they end up in a pinch to avoid losing everything by criticizing what is dangling in front of them. See the problem? Telling a player he loses the right to complain, is denied a voice, because he gets something IS THE PROBLEM. That’s slaveholder thinking: I gave you a roof to sleep under so you can’t complain and I’ll destroy you if you do.

Second, the history of the Missouri Compromise and Kansas-Nebraska Act should quickly dispel any notion of what this kind of “choice” really means under the racist power structures that date at the way back to America’s origin story.

Note that slaves in America were sometimes paid, and perhaps even accumulated wealth under the thumb of their owner. In one case documented in “Bond of Iron” the slaveowner created a competitive system whereby his slave producing most output over a short period would be awarded a prize.

Slaves were allowed to take payment in cash or kind in the company store. The accounts show when purchases were made and what items were bought. Individual slave ledgers demonstrate personal priorities and values.

Sound familiar? Like boxing (or football), it was competition meant to force slaves to compete to the point of harming themselves and each other. Some do still argue that during slavery being “allowed to take payment” made for a suitable life despite being owned by another human and deprived of fundamental rights.

What was their actual choice in a tree of decisions? Compare that with freedom described in “African Maroons in Sixteenth-Century Panama: A History in Documents”

…from the 1520s through the 1580s, thousands of enslaved Africans fled captivity in Spanish Panama and formed their own communities. “The fact we see individuals fleeing slavery who are able to hold the Spanish Empire at bay and fight them to a standstill for almost five decades — and then negotiate for their freedom and right to govern their communities — that should be a testament to the resilience of people who suffered the dislocations of the slave trade and the inhumanity of enslavement.”

The point of condemning slavery (abolition is as old as slavery itself)… wasn’t whether or not someone received pittances and pithy rewards within the death camp fights before they expired from them, but whether they achieved actual freedom and liberty stemming from equal rights.

Real choice? No. Football is far from offering a real choice, by design.

Kaepernick is exactly right in his comparison.

The backlash he sees is a reminder of the reality of American history based in concerted “know nothing” and “ignorance” campaigns.

It’s no wonder Texas football uses “remember the Alamo” and “eyes of Texas” chants to this day… as if football games let them get away with saying they want to keep slavery alive and nobody will complain.

Or Florida, for that matter, which like Texas was a state created by invading an American border territory specifically to expand slavery and deny freedom to the Blacks living there. It has its own a gruesome and racist football chant:

University of Florida banned its famed “Gator Bait” cheer on Thursday because of the term’s reported racist history…. Stories from as far back as the 1880s mention American hunters using black babies to attract large reptiles.

As far back as the 1880s? How about as recent as… the last Florida football game?

Here’s the bottom line: football is popular in America because it represents the fantasy of success through over-specialization.

However, even peak performance from every node in a network within own strengths still needs some standard by which they all adhere. As my father used to say: individual time zones (social) only work because everyone agrees on time (science).

And science isn’t magic, it’s measured and purposeful: to communicate about weather, Beaufort and Fitzroy each went to sea with at least a dozen clocks on board.

The cogs of every single clock were managed by cognition, as I illustrated in my RSAC SF presentation last year.

The over specialization of football is falsely seductive as a “privilege” sadly rooted in America’s origin story of slavery where hard work gets done by others within silos of productivity.

Worse, displacement to the silos caused by industrialization (like the current information technology boom) throws specialists into a self-defeating fight with each other for dominance, wired for competition and against collaboration.

It’s a societal failing to allow people to believe success comes from landing by birthright into a special competitive “position” (e.g. Robert E. Lee) as opposed to humbly rotating through domain-wide challenges to become “made” by hard work, let alone understanding the whole field of play (e.g. Ulysses Grant).

Americans should aspire to be like Grant (standing on galloping horses by age 7, constantly unlearning and improving), and never, ever to be a power-obsessed solitary leader like Lee (or Mussolini, a similar man to Lee).